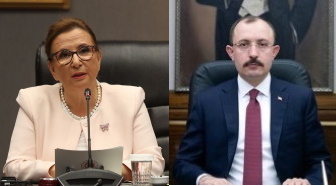 Turkish President Recep Tayyip Erdoğan has fired his trade minister Ruhsar Pekcan in a decree issued late on Wednesday night in an attempt to mitigate the damage from growing accusations of widespread nepotism in the government. Pekcan is accused of favouring her husband’s company in government tenders. She directed the Trade Ministry to purchase TL 9 million (USD 1.1 million) worth of disinfectants from two companies owned by her husband, Hasan Pekcan. In a statement on Tuesday, Pekcan denied any wrongdoing. She nevertheless confirmed the purchases, but said they amounted to about TL 500,000 liras (USD 61,000) in total, adding that the tenders were allocated according to proper procedures and that her husband’s companies were chosen because they offered the lowest bids. Pekcan was replaced by Mehmet Mus, who is a member of parliament for the ruling Justice and Development Party (AKP) and reportedly has close relations with former finance minister and Erdogan’s son-in-law Berat Albayrak. Mus was among the first AKP officials to defend Albayrak after his resignation as Treasury and Economy Minister and called for him to remain in office

It has long been rumoured that Erdoğan was planning a cabinet reshuffle, and at the same time he sacked his Trade Minister, in another decree, he replaced Zehra Zumrut Selcuk as Minister of Family, Labour and Social Services and split the ministry in to two, re-establishing the Ministry of Family and Social Services and the Ministry of Social Security, to be headed by newly appointed Derya Yanik and Vedat Bilgin, respectively.