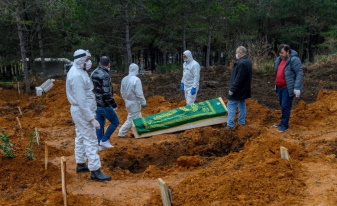 Turkey’s Health Minister Fahrettin Koca announced Turkey’s death toll from the coronavirus pandemic as 168 as of March 30th. The number of confirmed cases increased by 1,610 to a total of 10,827. Koca stated that 11,535 tests had been conducted in the last 24 hours, bringing the total number of tests carried out in Turkey to around 77,000. He added that the number of patients in the intensive care units of the hospitals was 725, that the number of patients on ventilators was 523, and that 162 people, who were diagnosed with coronavirus and treated in hospitals, had recovered.

On March 27th, Turkish President Recep Tayyip Erdogan announced further tough restrictions, including the cancellation of all international flights, banning residents from traveling between cities via public transport and planes unless granted permission by local authorities, the closing of picnic sites on weekends, and other measures. The government’s restrictions on movement within Turkey and especially between major provincial cities indicates that it is concerned about the spread of coronavirus in Turkey’s major population centres.

Unfortunately, there is very little information as to the number of infections and deaths in each city. Indeed, the government seems to generally lack transparency with regards reporting of the development of the pandemic in Turkey. Videos of doctors claiming that the coronavirus pandemic is far more serious than everyone is led to believe have been appearing on social media. They have inferred that confirmed cases are substantially higher than those reported by the Health Ministry. The government has been very sensitive to criticism about its handling of the pandemic, and justifies its stance by its wish to avoid a state of panic among the population. The lack of a free media in Turkey to investigate, question, report and criticize means that the government faces few obstacles to its policy of sharing minimum information with the general public.

There has also been a surprising discrepancy between figures presented by Erdoğan and his health minister. Erdoğan announced the number of coronavirus patients as 8,554 in his address to the nation on March 25th, whereas the Health Minister had given the number as 2,433 in his twitter account the same day. No subsequent explanation was provided by government sources for this difference, despite reaction from the opposition parties and social media. In a statement on March 27th, Erdogan put the total number of cases at 5,698, matching Koca’s figure for the day.

In a statement on March 26th, the Turkish Medical Association (TTB) said that the Health Ministry should begin releasing detailed data on its official website, including breakdowns by a patient's city, age, gender and profession. In addition to figures on those who have tested positive for the virus, the ministry should also reveal the number of cases that are clinically and radiologically consistent with COVID-19, regardless of the results of their tests. The TTB warned, “People will remain insufficiently convinced of taking personal precautions, from hand washing to social distancing, unless they are adequately informed on how much the outbreak has spread among the public.”