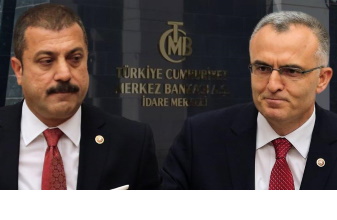 Turkish President Recep Tayyip Erdoğan today sacked the governor of the Turkish Central Bank Naci Ağbal in a move which is likely to have an earthquake effect on monetary markets. Through a presidential decree, Ağbal was replaced by Sahap Kavcıoğlu, a former member of parliament for Erdogan’s ruling AK Party, previously holding high-level positions in several banks, including state lenders Halkbank and Vakifbank, and a critic of Turkey’s high rates.

This is the third time that Erdoğan has dismissed the central bank governor since July 2019. The dismissal follows the Central Bank’s hike in its policy interest rate two days earlier on Thursday March 18th by 200 basis points to 19%. Ağbal had only been appointed some four months earlier following severe pressure on the Turkish lira. His appointment coincided with the replacement of the Treasury and Finance Minister Berat Albayrak with Lütfi Elvan. The new economic team had since gained the confidence of international money markets, and following the increase in the policy rate of the Bank on November 19th by 475 basis points and on March 18th by 200 basis points, the Turkish lira had recovered from a low of TL 8.50 to TL 7.20 to the US dollar. The new economic team had been praised for re-establishing the credibility of the Central Bank. With the sacking of Ağbal, the Turkish lira can be expected to put under severe pressure when the money markets open on Monday, as well as the Istanbul Stock Exchange.

The new governor Sahap Kavcıoğlu wrote in an article for Yeni Safak newspaper last month that  “While interest rates are close to zero in the world, opting for a rate hike for us will not solve economic problems,” adding that rate hikes will “indirectly cause inflation to rise”. On the other hand, Agbal had said maintaining a tight monetary stance was not a short-term policy and that Turkey could get inflation - currently above 15% - down to its target level of 5% by 2023 by sticking to that line. In an interview with Reuters last month, he said that “If you abandon a tight policy stance... at an early stage, past experiences show that inflation moves upward again.”

It is likely that Erdoğan had decided to sack Ağbal after the 200 basis points hike in the interest rate on Thursday, despite expectations by economists that the increase would be half this, that is 100 basis points. In other words, the Bank could have got away with a 100 basis points with no repercussions. As far as Erdoğan was concerned, Ağbal was getting carried away and was pushing his luck to far. There are now concerns that there will be a reversal in monetary policy with interest rate deductions, and that Mr Erdogan's decision to install Mr Kavcioglu as governor could erode the gains made during Mr Agbal's short tenure.

Erdogan has his own concept of economics that higher interest rates cause higher inflation, a theory that flies in the face of conventional economic theory everywhere. Higher interest rates lead to higher costs of borrowing which deters consumers from over-spending, while encouraging people to save. However, the downside is often slower economic growth, and such an outcome is unacceptable to Erdoğan who is aware of the political risks this will bring.