Turkish and US Presidents meet at Nato summit 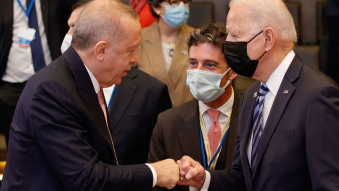 The long-awaited meeting between Turkish President Recep Tayyip Erdogan and US President Joe Biden has taken place at the NATO summit in Brussels. The meeting, which lasted some 90 minutes, went pretty much as expected, with none of the big issues straining ties between the NATO allies getting resolved. Erdoğan commented positively that “We think that there are no issues within US - Turkey ties (that are unsolvable) and that areas of cooperation for us are greater than (our) problems.”

However, in a subsequent news conference, Erdoğan avoided questions about whether any actual progress had been made on the most serious source of contention between Turkey and the USA, that is Turkey’s acquisition of Russian S-400 missiles, for which Turkey has already paid a significant price. Turkey is under an effective arms embargo from the United States and has been removed from the F-35 consortium that produces the fifth-generation fighter jets. Erdogan has always asserted the line that Turkey had resorted to acquiring the Russian system because Washington had refused to sell it Patriot missiles, whereas the real reason was that the purchase of the Patriots had failed over technology transfer issues. In the news conference, Erdoğan would only say that defence officials from both sides were in discussions about it.

Biden also clearly spurned Turkey’s repeated demands to for the US to halt its partnership with the Syrian Kurdish-led Syrian Democratic Forces. Turkey insists the armed group that helped the US-led coalition defeat the Islamic State is part of the Kurdistan Workers Party, an armed group that’s been fighting Turkey since 1984 and is labelled a terrorist group by the EU and the United States. Erdogan told reporters that he had “regretfully” observed during his meeting with Biden that the US continues to maintain its view that the Syrian Kurdish fighters are separate from the banned terrorist group.

It was clear from the NATO summit, just as from the preceding G7 summit, that Biden’s immediate priority was to repair relations with its Western allies which had been so badly damaged by his predecessor Donal Trump. Addressing the many outstanding issues of disagreement could wait until subsequent meetings. No doubt aware of this, Erdogan presented an uncharacteristically subdued and reconciliatory image throughout the NATO event, giving assurances that Turkey was a loyal and critical NATO ally.

Erdogan acknowledged that the issue of Biden’s use of the term "genocide" on April 24th to commemorate the World War I deaths of more than 1 million Armenians in Ottoman Turkey during the First World War, making him the first American president to have done so,  had “thankfully” not come up during their meeting. Despite his relief, Erdogan had previously publicly pledged to air his ire over the issue during his face time with the US president.

Though there were no tensions displayed during the NATO meeting, it is known that Biden believes that a very robust stand need to be adopted against authoritarianism. The US sees Erdogan and NATO member Hungary’s Prime Minister Viktor Orban as both authoritarians, while Poland’s president Andrzej Duda is leaning in that direction.

Erdogan wanted to present the meeting as a success, telling reporters that he had invited Biden to Turkey and that Biden had replied that he will come once his schedule is clear, but giving no indication whether Biden had invited him back. Erdogan said he would be traveling to the United States to attend the UN General Assembly opening in September and to inaugurate a Turkish cultural centre in New York. Of course Erdoğan is very much aware of Turkey’s need for finance from the West as it flounders in a crippling economic recession, and expression of tensions between Turkey and the West is not going to help his cause.

The one area where agreement was achieved was that of Turkey’s offer to operate and protect the Kabul airport after US and NATO forces withdraw from Afghanistan later this year. NATO chief Jens Stoltenberg affirmed that Turkey would play a key role, whereas the Taliban says that it is opposed to Turkey’s continued presence. Turkey’s allies Pakistan and Qatar, which hold sway over the Islamist militia, are expected to intervene on its behalf. Turkey’s continued role in Afghanistan has been presented as a success in Turkey, and an example of how Turkey and the US can work together.