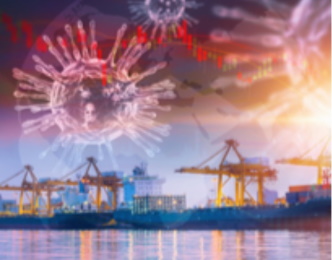 According to figures prepared by the Turkish Statistical Institute (TÜİK- TurkStat) in cooperation with Turkey’s Ministry of Trade, and using the General Trade System (GTS) calculation method, Turkey’s foreign trade deficit was USD 3,420 million in May 2020, 102.7% higher than the figure for the same month of the previous year, but 25.2% lower than the deficit figure of USD 4,572 million for the previous month of April 2020.

Exports totalled USD 9,967 million and imports totalled USD 13,387 million in May 2020. The export figure was a 40.9% fall and the import figure a 27.8% fall on the figures for the same month of the previous year. The export figure was 11% higher and the import figure 1.2% lower than the respective figures for the previous month of April 2020. The continued low export and import figures in May were due to the coronavirus pandemic which has caused many industries to reduce production as a result of the need for social distancing and falling demand. Exports in May however stabilised, with an increase of 11% on the previous month, as industries such as the automotive industry restarted production.

The energy sector lost its first place again in the imports table in May 2020, as in April 2020. Due to the coronavirus pandemic, production in Turkey’s industry has largely scaled down, roads have been emptied of traffic, and the population has economised on use of home-use electricity and natural gas. The global energy markets have also seen upheaval and energy prices have plummeted, drastically reducing Turkey’s energy bill. The energy import figure consequently fell to USD 1,483 million in April 2020 and USD 1,269 million in May 2020. The May 2020 figure was 9.5% of total imports, compared with 10.9% in April 2020, 14.5% in March 2020, and 19.7% in the same month of the previous year. In May 2020, energy imports came in third behind machinery and mechanical equipment (1,607 million) and precious metals (USD 1,442 million).