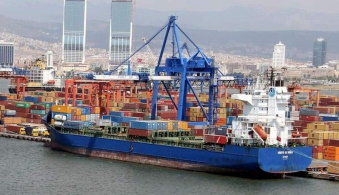 According to figures prepared by the Turkish Statistical Institute (TÜİK- TurkStat) in cooperation with Turkey’s Ministry of Trade, and using the General Trade System (GTS) calculation method, Turkey’s foreign trade deficit was USD 2,846 million in June 2020, 17% lower than the figure for the same month of the previous year, and also 17% lower than the deficit for the previous month of May 2020.

Exports totalled USD 13,462 million and imports totalled USD 16,308 million in June 2020. The export figure was a 15.7% increase and the import figure a 8.3% increase on the figures for the same month of the previous year. The export figure was 35.2% higher and the import figure 21.8% higher than the respective figures for the previous month of May 2020. The collapse of export and import figures in April and May was due to the coronavirus pandemic which forced most countries to introduce strict isolation procedures for their populations. Businesses throughout the world were forced to close down as demand for their goods or services evaporated. However, as the lockdown was gradually relaxed in June, so Turkey’s foreign trade activity returned to pre-pandemic levels. Foreign trade activity was 11.5% higher in June compared to the same month of the previous year, and was 27.5% higher than the figure for the previous month of May.

The June 2020 foreign trade results show a significant recovery on the previous two months. However, there are claims that the June 2020 results only show a temporary recovery on paper. Firstly, there is the calendar effect. The Ramadan holiday came in June last year and an extension to 9 days was provided by the government. If you discard weekends, there were only 15 working days in June 2019. This year the Ramadan holiday was in May and there were 22 working days in June. Therefore there were 7 more working days in June 2020. Secondly, following the lockdown in April and May, there will have been a gradual recovery in global trade which would have benefited Turkey’s foreign trade activity. Thirdly, there will have been a backlog of orders from April and May which would have been met in June. Imports in June were expected to decrease because of the large increases in import custom duties. This was indeed the case but did not show a comparative fall because of the extra 7 working days in June 2020.

The energy sector has again lost its first place again in the imports table in June 2020, as in April and May 2020. Due to the coronavirus pandemic, production in Turkey’s industry had largely scaled down, roads were emptied of traffic, and the population had economised on use of home-use electricity and natural gas. The global energy markets had also seen upheaval and energy prices plummeted. The energy import figure consequently fell to USD 1,055 million in April 2020 and USD 1,293 million in May 2020, with a recovery in June 2020 with USD 1,573 million. The June 2020 figure was 9.6% of total imports, compared with 19% in the same month of the previous year. In June 2020, energy imports came in third behind precious metals (USD 2,395 million) and machinery and mechanical equipment (1,921 million). Global petrol prices are still depressed and it is expected that energy imports will only regain their previous position as the global economy gradually recovers pushing energy demand up, and as production levels in Turkey return to normal.