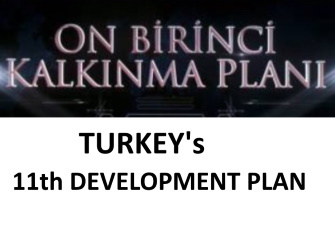 The 11th Development Plan of Turkey for 2019-2023 has been accepted at the Grand National Assembly of Turkey on July 18th, being approved by a total of 268 lawmakers with 44 against, out of a total of 600 lawmakers.

According to the Turkish government, the plan is a roadmap for strengthening the country’s economy and improving its position in international markets. Under the plan, Turkey aims to increase the country’s gross domestic product to USD 1.08 trillion by 2023, the centenary of the Turkish Republic, with a per-capita income goal of USD 12,484. To this end, the government expects annual real economic growth of 4.3% on average between 2019 and 2023. The country’s industrial sector, with a planned growth rate of 5.7% on average, is expected to play a central role in economic growth and achieve a 24.2% share in the country’s GDP by 2023. Fixed capital investments are forecast to grow 5.3% on average and private sector fixed capital investments’ share in GDP to rise to 26.8%. The agriculture sector is to grow by 3.1% on average with its share in GDP declining to 5.4%. The service sector’s share in GDP is expected to be 60.1% by 2023 yearend. Turkey’s GDP stood at USSD 784 billion in current prices in 2018, lower than the USD 851 billion GDP in the previous year, and the Turkish economy grew by 2.6% in 2018.

According to the five-year 11th Development Plan, the government will continue to pursue price and financial stability policies and the annual consumer price inflation is expected to gradually come down to 5% by 2023. The latest data from the Turkish Statistics Institute (TÜİK - TurkStat) showed that annual inflation was 16.65% as of July 2019.

The plan aims to bring down the country’s unemployment rate to 9.9% with  4.3 million additional jobs being over the five years.

Under the new development plan, the Turkish government remains committed to fiscal discipline and the central government budget deficit is forecast to remain at 2% of the GDP until 2023, with public expenditure, which stood at 10.7% of GDP in 2018, gradually falling back to 9.6% of GDP by 2023 yearend.

Turkish Vice President Fuat Oktay, in his presentation of the 11th Development Plan to parliament’s planning and budget committee, said that the plan attached importance to the country's energy and development policies. Oktay emphasised that "Our main aim will be to provide energy with qualified, sustainable, secure and bearable costs. Within this scope, the focus will be on seismic oil and gas detection and drilling activities in the sea." There was clearly a direct reference here to Turkey's ongoing drilling efforts in the Eastern Mediterranean, which is being disputed by Cyprus and the EU.

The Investment Support and Promotion Agency of Turkey (ISPAT), known as the Investment Office, which reports directly to the President of Turkey, is the official organisation for promoting Turkey’s investment opportunities to the global business community and for providing assistance to investors before, during, and after their entry into Turkey. This agency has particularly benefited from Turkey’s 11th Development Plan, receiving more authority and responsibility to make it more effective.

The plan has revealed a new central investment system, by which the Investment Office has authority to act as a one-stop-shop office for investments. To this end, a central investment information system will be established within the Investment Office to streamline the process for obtaining required permissions and approvals. This new structure will also assist in match-making between local and international companies for possible cooperation, and priority has been given to strategic and high-technology products and export-oriented investments under a project-based incentive system for attracting international investments.

The 11th Development Plan also includes plans to reform the pension system in Turkey. Worker representatives are particularly worried about the government’s plans to integrate the severance pay fund into the Individual Pension System, and to introduce flexible working arrangements which will erode workers’ rights.

Compared with previous development plans of the AKP government, the new plan appears to have considerably lower and more realistic goals.