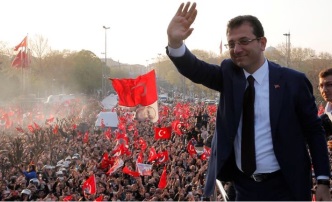 Ekrem İmamoğlu, the opposition National Alliance block candidate for mayor of Istanbul, won a stunning victory today in a closely watched repeat election that ended weeks of political tension and broke President Recep Tayyip Erdoğan's party's 25-year hold on Turkey's biggest city. The mayoral election of March 31st, 2019, in which İmamoğlu had achieved a narrow victory, had been cancelled as a result of a challenge by the ruling AK Party.

The governing party's People’s Alliance block candidate, former Turkish Prime Minister Binali Yıldırım, conceded moments after returns showed him trailing well behind İmamoğlu. The final result gave İmamoğlu 54.21% of the vote compared to Yıldırım’s 44.99%, which translated into a vote difference of 806,456 votes, well over the 13,000 vote difference of first March 31st mayoral election, thereby making any attempt by the governing party to refute his victory increasingly unlikely. The turnout at the election was a high 84.44%, which compares with 83.88% of the first March 31st election.

Following İmamoğlu’s second victory, mass celebrations erupted not just in Istanbul, but in many cities across Turkey. Many supporters hung out of cars, blaring horns and waving red-and-white Turkish flags.

Turkish President Recep Tayyip Erdoğan tweeted his congratulations to İmamoğlu. He had campaigned for Yildirim in Istanbul, where the president started his political career as mayor in 1994. The ruling party still controls 25 of Istanbul's 39 districts and a majority in the municipal assembly. İmamoğlu will have to work with these opposition municipal representatives, and he is faced with a very hard uphill struggle. İmamoğlu said that he was prepared to work with the opposition and called on Erdoğan to work together to solve Istanbul's problems.

Istanbul, a city of some16 million people, draws millions of tourists each year and is Turkey's commercial and cultural hub. Straddling Europe and Asia, Istanbul accounts for close to a third of Turkey's GDP.