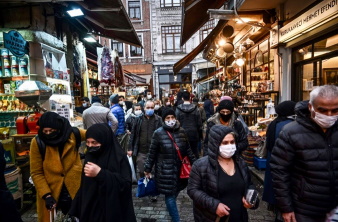 The Turkish Statistical Institute (TÜİK - TurkStat) announced an increase in the consumer inflation rate for April 2021 compared with the previous month as 1.68%, resulting in the annual-to-date rate as 17.14%. This increase is slightly below the projection of market analysts in a poll organised by Anadolu Ajans, the state’s national news agency.  The annual inflation rate of 17.14% for April 2021 compares with 10.94% for April 2020 and 16.19% of the previous month of March 2021.

The highest monthly increase was recorded in clothing and footwear with 7.57%, followed by food and non-alcoholic beverages with 2.13%, education with 2.09%, miscellaneous goods and services with 1.89%, transportation with 1.68%, entertainment and culture with 1.50%, and restaurants and hotels with 1.35%. Monthly increases were also recorded in housing with 0.95%, alcoholic beverages and tobacco with 0.73%, and health with 0.56%. Monthly decreases were recorded in communications with 0.28% and household goods with 0.03%.

There is much speculation as to the accurateness of the inflation figures produced by TurkStat as ordinary citizens understandably feel that they have experienced a much higher rise in the cost of living over the last year. Under the new leadership of Şahap Kavcıoğlu, the Turkish Central Bank has revised its inflation rate forecast for 2021 from 9.4% to 12.2% in its 2021-II Inflation Report of April 29th, 2021. The Bank has also forecast a 7.5% inflation rate for 2022, and a 5% inflation rate for 2023. The April 2021 inflation rate of 17.14% is now 1.86 percentage points below the Bank’s policy interest rate of 19%. In light of the recent sacking of the governor of the Turkish Central Bank on March 20th, the continuing volatility of the Turkish lira, and the aversion of the government towards increasing interest rates any further, it is unlikely that inflation will be brought down under control in the near future.