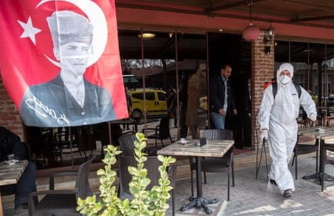 As the number of coronavirus cases and deaths decreases in Turkey, so the President’s Office has announced today the plan for the normalisation of the movement of the population as follows:

As from May 27th, the curfew of those under 20 and over 65 years of age will be lifted, and the prohibition of entry to and exit from 13 cities will be lifted.

As from June 1st, the general curfew will be lifted; and hotels, bars, night clubs, clubs, tea gardens, association buildings, swimming pools, and sports facilities will be allowed to open, in addition to marriage registry offices (with no more than 25% capacity use). Hospitals will also start to return to normal operations.

As from June 12th, Friday prayers can be conducted in open areas outside the mosque., whereas normal prayers may be conducted at mosques with the use of face masks and the ensuring of proper social distancing.

As from July 1st, wedding halls, cinemas, and theatres will be allowed to open. Health personnel will be able to start to use their annual leave and the transfer and promotion of health personnel

The Turkish Health Minister Fahrettin Koca announced that Turkey’s daily COVID-19 death as of today had reached 32, resulting in a total death toll in the country of 4,340.  New confirmed cases were given as 1,141 and tests conducted as 24,589  in the last 24 hours. Currently, there are a total of 156,827 confirmed cases in the country with 118,694 of them having recovered.

The Muslim holiday marking the end of the fasting month of Ramadan, traditionally a time of gathering was marked by a nationwide lockdown, the first of its kind in Turkey to combat the coronavirus. This lockdown will last 4 days, including  Saturday May 23rd, and the three Ramadan holiday days of Sunday May 24th, Monday May 25th, and Tuesday May 26th. Previous weekend and holiday lockdowns affected a maximum of 31 out of 81 provinces.