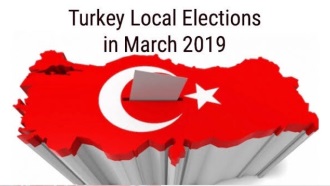 Yesterday March 31st, 2019, municipal elections were carried out throughout Turkey. Delays in declaring the results by Anadolu Ajans (AA), the state news agency, caused them to be announced today. Two coalition blocks competed in the elections. The ruling Justice and Development Party (AKP) joined forces with the National Movement Party (MHP) under the People’s Alliance block, and the Republican People’s Party (CHP) joined forces with the Good Party (İYİ Parti) under the Nation Alliance block. Another major party competing was the People’s Democratic Party (HDP).

Electoral results show Istanbul having fallen to the opposition CHP by a very small margin, although the ruling AK party has challenged the result and refused to concede. Ekrem İmamoğlu, the CHP candidate for Istanbul, who has already changed his Twitter profile to "mayor of Istanbul", vows to serve all sides, both those who voted for and against him, without discrimination. President Erdogan's setbacks deepened elsewhere, losing the capital, Ankara, and several other cities as his conservative voters punished him for an economic crisis. CHP also won the capital city Ankara, but AKP is also contesting this result. CHP won Turkey’s third largest city of İzmir, and also won Antalya and Mersin. If CHP manages to hold on to İstanbul and Ankara, despite protests, then the municipal elections would have been a significant victory for them.

Interestingly, most parties are assessing the municipal elections as a victory for themselves. The only party which is no doubt unhappy is the İYİ Parti which did not win a region or a city despite getting 7.45% of the total vote.

Municipal elections are important in Turkey and the President Erdoğan has taken them very seriously despite the fact that he will rule the country for another 4 and a half years without an election. Erdoğan was the mayor of Istanbul before he became prime minister. He turned this poll into, in effect, a referendum on himself. However, his image of invincibility now seems to have been broken and an opposition long seen as hopelessly divided has got a new lease of life. A large proportion of the electorate is devoted to Erdogan, but the half of the country that detests its polarising president are starting to believe that he is beatable.

This was the first municipal vote since Erdogan assumed sweeping executive powers through last year's presidential election. The ruling AK Party, with its roots in political Islam, has won every election since coming to power in 2002.Erdogan, whose two-month campaign included 100 rallies, said the poll was about the "survival" of the country and his party.

With most media either pro-government or controlled by Mr Erdogan's supporters, critics believe opposition parties campaigned at a disadvantage. Mr Erdogan's rallies dominated TV coverage. The opposition pro-Kurdish Peoples' Democratic Party (HDP) said the elections were unfair and refused to put forward candidates in several cities. Some of its leaders have been jailed on terrorism charges, accusations they reject.