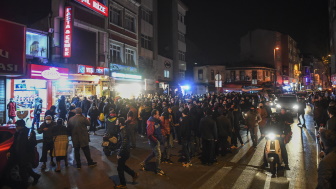 Turkey announced a two day curfew in 31 provinces for the weekend starting Saturday April 11th, in order to prevent the spread of the coronavirus. The announcement of the curfew was made late yesterday evening only a few hours before its implementation at midnight. This late announcement resulted in tens of thousands of Turks rushing in to the streets to do last minute shopping before the curfew deadline. Crowds of desperate citizens were seen outside markets and bakeries. Whereas the purpose of the curfew was to ensure isolation of the population in their homes, the opposite was achieved, much to the embarrassment of the Turkish government, which was seen as totally incompetent. Images of the crowds were captured on social media and went viral immediately.

The Turkish Interior Minister Suleyman Soylu resigned later in the evening as a result of the criticism of the government’s handling of the curfew, taking full personal responsibility. However, it is more likely that the curfew decision was made by the Turkish President Recep Tayyip Erdoğan, who has been against a lockdown of workplaces because of the potential damage to the economy, and as a compromise would have preferred a curfew to be implemented at weekends. Indeed, Soylu’s resignation was not accepted and was withdrawn late last night.

The Ministry of Health announced yesterday evening that there were 61,049 confirmed cases of the virus, and a total of 1,296 people had died. The first fatalities in the country’s over-crowded prison population were also announced with three convicts in an open detention centre reported as having succumbed to the virus. A controversial amnesty law, which excludes thousands of prisoners of conscience, is currently before the Turkish parliament.