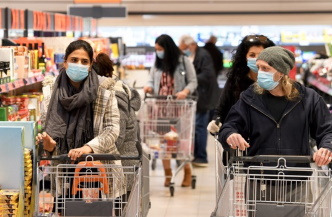 The highest monthly increase was recorded in transportation with 4.51%, followed by food and non-alcoholic beverages with 4.16%, household goods with 1.69%, entertainment and culture with 1.53%, clothing and footwear with 1.46%, miscellaneous goods and services with 1.14%, restaurants and hotels with 1.13%, and housing with 1.05%. The lowest monthly increases were recorded in health with 0.80% and communication with 0.12%. There was no increase in alcoholic beverages and tobacco, and a monthly decrease was recorded in education with 0.19%.

The highest annual increase was recorded in miscellaneous goods and services with 29.42%, followed by food and non-alcoholic beverages with 21.08%, transportation with 18.67%, health with 16.25%, household goods with 14.22%, restaurants and hotels with 12.59%, and entertainment and culture with 10.24%. The lowest annual increases were recorded in alcoholic beverages and tobacco with 0.67%, followed by clothing and footwear with 0.99%, communication with 5.19%, education with 7%, and housing with 9.12%.

There is much speculation as to the accurateness of the inflation figures produced by TurkStat as ordinary citizens understandably feel that they have experienced a much higher rise in the cost of living over the last year. In the New Economic Program announced on 29.09.2020, the yearend inflation forecast for 2020 was 10.5%, with a fall to 8% in 2021, to 6.0% in 2022, and 4.9% in 2023. The Turkish Central Bank revised its inflation rate forecast for 2020 to 12.1% and for 2021 to 9.4% on 28.10.2020. The Bank raised its policy interest rate some 475 basis points to 15% on November 19th, such that it is now 0.97 percentage points above the inflation rate, contrary to previous period of negative interest rates. With its new economic team, the Turkish government has indicated that it is prepared to introduce monetary policy reforms. It has been debated as to whether the surge in the inflation rate in November has been a sign of the government’s new approach whereby a more credible inflation rate will be put forward.