Turkey unveils its indigenous car to the public 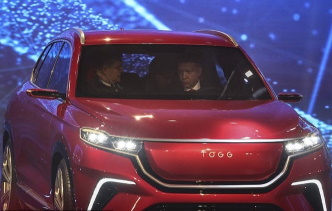 The prototype of Turkey's first indigenous electric car was unveiled on December 26th, 2019 to the public. At a ceremony held in Kocaeli’s Gebze district just outside Istanbul and attended by Turkish President Recep Tayyip Erdoğan, the new car was displayed for the first time.

In his speech, Erdoğan said that the factory will be built on a 1 million sq.m plot of land which belongs to the Turkish military in Bursa’s Gemlik district. Turkey’s first attempt at producing its own car was the Devrim (Revolution) car in 1961, but it never made it past the prototype stage. Erdoğan stressed Turkey will deter all efforts to hinder the production of the new indigenous car which has been a long-held dream in Turkey.

Two models of the car unveiled were an electric light SUV and a sedan, and were in the colours red and white, signifying the Turkish flag. Gürcan Karakaş, the CEO of Turkey's Automobile Initiative Group (TOGG), the group established for the production of the car, said at the unveiling ceremony that the car had been designed to be technologically smart and that they planned to have the production facilities completed in 2021 and the car available in 2022. He added that this fully electric car will be produced in five models with two alternative engine sizes of 200 and 400 horsepower, and will have a range of up to 500 km with locally produced Lithium-ion battery chargeable to 80% in less than 30 minutes. An annual production total of 175,000 cars is planned.

In June 2018, five Turkish industry giants; Anadolu Group, BMC, Kok Group, Turkcell and Zorlu Holding as well as an umbrella organization, the Union of Chambers and Commodity Exchanges of Turkey (TOBB), which has a 5% stake in the project, came together to form Turkey's Automobile Initiative Group (TOGG) responsible for the production of the new indigenous car. However, despite the inclusion of such powerful private sector conglomerates in the project, the funding will largely be provided by the government. In addition to providing land for the production facility, the government will be providing investment incentives, tax exemptions and a purchase guarantee of 30,000 cars per year until the end of 2035. The total expected investment in the project has been given as TL 22 billion (USD 3.7 billion) over15 years, with a workforce of over 4,000.