Turkey tightens up control over movement of its citizens 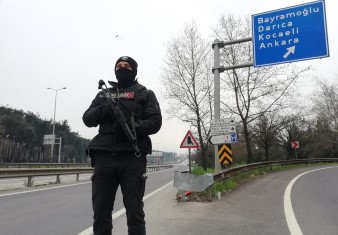 In a televised broadcast on Friday evening, the Turkish President Recep Tayyip Erdoğan announced that people were now barred from leaving 31 of Turkey’s major cities. This in effect means that the provinces in which these cities are located are also in effect under lockdown. This regulation was to be enforced at midnight the same evening, leaving people little time to move back to their city of abode, should they be away in another city for whatever reason. On March 27th, the use of public transport and planes between cities had been banned, but private cars were allowed to operate.

Turkey-wide measures are now added almost daily. A new regulation introduced is the extension of the 24 hour curfew, previously imposed on citizens of 60 years and over, to citizens under the age of 20. Erdoğan also announced on Friday evening that it was now mandatory for citizens to wear masks in all crowded areas. Municipalities have also taken their own precautions as well, with Istanbul and Ankara not allowing citizens to use public transportation without wearing a mask.

This evening, the Turkish Health Minister Fahrettin Koca announced the the number of confirmed coronavirus cases as 23,934, a jump of 3,013 in the last 24 hours. The number of deaths rose by 76 to 501, with 1,311 still in intensive care.  The more positive news is that recoveries had risen to 786 from 464.  Koca added that more than 12% of the total 161,380 tests in Turkey have been conducted in the last 24 hours.

Information has been released in the press as to the source of coronavirus cases in Turkey. It has been shown that mostly people traveling from Europe contaminated Istanbul and İzmir, two provinces which have reported the highest number of confirmed cases to date, while the spread of the virus followed different paths in other parts of the country.

Istanbul alone accounts for nearly 60% of all confirmed cases with nearly 9,000 cases, while İzmir, the third largest city by population, came second with almost 900 cases. From Istanbul, the virus has spread to at least four to five other cities, including the north-western province of Kocaeli and the capital Ankara, which has the third largest number of virus cases in the country.

Studies have also revealed that the main spreaders of the virus in the Central Anatolian provinces were those who returned from the Umrah pilgrimage in Saudi Arabia. The pilgrims, who were not put in quarantine when they arrived in Turkey, passed on the virus to locals in those areas. In the eastern and south-eastern provinces, the virus cases increased due to people who travelled from Turkey’s larger cities to these areas and due to people in these areas with contact with neighbouring Iran and Iraq, countries which were struggling to contain the virus. It has been alleged that the virus arrived in the provinces of the Mediterranean region, and especially in Antalya, a popular holiday destination, due to people coming from other major cities in Turkey and Turkish nationals residing in Europe who came to take advantage of a school break. A similar influx of people to Turkey’s Black Sea region was attributed to the spread of the virus there.