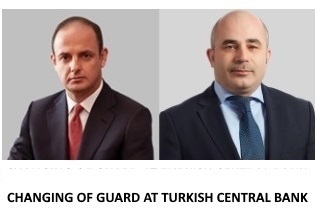 The governor of the Central Bank of Turkey Murat Çetinkaya (on the left in picture) has been removed from office per a presidential decree published in the Official Gazette No.30823 dated July 6th, 2019.  Çetinkaya had been serving as governor since April 2016. The decree also appoints his deputy Murat Uysal (on the right in picture) as the new governor.

No official reason was given for the sacking, but markets have speculated over recent weeks that Cetinkaya may be pushed out by the government because of his reluctance to cut rates. The Central Bank has faced pressure in the past from Turkish President Tayyip Erdogan to lower interest rates to improve growth. The Central Bank, wary of lowering interest rates while the local currency is volatile and during a period of high inflation, has so far been able to fend off this pressure, but as the Turkey faces a deepening economic recession, the Turkish government has become more desperate to try and revive the economy.

It has generally been understood that differences between the government and the governor over the conduct of monetary policy have deepened in the past few months. Cetinkaya had hiked the benchmark interest rate by a total of 750 basis points last year to support the ailing Turkish lira , pushing it to 24% by September 2018 where it has since been left unchanged. It has also been said that the President and the Treasury and Finance Minister Berat Albayrak  demanded his resignation, but Cetinkaya reminded them of the bank's independence and declined to resign. Indeed, there has been much criticism that it was legally incorrect to remove the governor from office because of his independent status in law, and his removal has now led to concern about the credibility of the Central bank’s authority and independence.

Murat Uysal, who has been acting as Deputy Governor since June 9th, 2016, said in his first statement as governor that he emphasized that the Bank will continue to independently implement monetary policy instruments focused on achieving and maintaining its primary objective of price stability in line with the duties and responsibilities granted to him by law. He also stated that the Bank’s communication channels for the policies aimed at achieving price stability and financial stability will be utilized at the maximum level in the new period.

The Turkish Statistical Institute (TÜİK) showed the annual inflation rate in June as down to 15.72%. This may offer the Central Bank an excuse to reduce its policy interest rate and it may well implement a rate reduction in its next Monetary Policy Meeting on July 25th, assuming that there are no degrading geo-political factors such as American sanctions relating to Turkey’s purchase of Russia’s S-400 missile defence system. .

The new governor Murat Uysal’s resume has been presented on the Central Bank’s website as follows :

“Born in 1971 in Istanbul, Murat Uysal graduated from the Economics Department in English of the Faculty of Economics at Istanbul University after attending Galatasaray High School. He earned a master’s degree in Banking from the Institute of Banking and Insurance at Marmara University and earned his master’s degree on Inflation Targeting and Inflation Targeting in Turkey and in the World.

Mr. Uysal started his career in banking in 1998, served as Specialist and Manager responsible for Foreign Exchange and Money Markets and Securities. Between 2007 and 2011, Mr. Uysal was Head of Money and Capital Markets. Mr. Uysal acted as Deputy General Manager responsible for Treasury Management at Halkbank between November 2011 and June 2016. Mr. Uysal served in the following posts simultaneously: Mr. Uysal served as a member of the Auditing Board of Halk Investment between 2008 and 2010, as a Board Member of Halk Asset Management in 2011 and as Chairman of the Board of Halk Asset Management from 2012 to 2014. He served as Chairman of the Board at Halk Invest between March 2015 and April 2016.

Mr. Uysal speaks English and French. Mr. Uysal was appointed Deputy Governor of the Central Bank of the Republic of Turkey on 9 June 2016 and he had been acting as Deputy Governor until his appointment as Governor.”