Turkey opens its borders for migrants to enter Europe 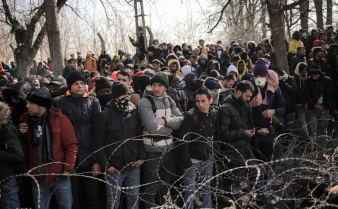 Turkish President Recep Tayyip Erdoğan confirmed yesterday that he was opening Turkey’s border for migrants to enter Europe. This action was taken as a result of the loss of at least 33 Turkish soldiers killed by an airstrike in the northwestern Syrian province of Idlib on February 27th. Erdoğan has demanded Europe’s support for the Turkish army’s operation to stop the offensive of the Syrian army, backed by Russia and Iran, which has caused another flood of Syrian refugees to Turkey, and has long accused European leaders of failing to do enough to help Turkey bear the load of hosting over 3.5 million Syrian refugees in Turkey.

Following Erdoğan’s announcement that he would not stand in the way of refugees who wanted to get to Europe, thousands of migrants languishing in Turkey were on the move this weekend. Many dropped everything the moment they heard the border was opening and rushed by bus or taxi, fearing they might miss the chance to get across. There have been claims that the Turkish authorities have actually encouraged them to go and have helped in the organisation of buses.

The reaction of Greece, alarmed at the spectre of a flood of refugees descending on its border with Turkey, was to suspend asylum applications, and to send a warning through mass text messages to all international phone numbers in the area. The messages said in English “From the Hellenic Republic: Greece is increasing border security to level maximum,” and “Do not attempt illegally to cross the border.” The Greek army also deployed large numbers of troops on the border. Many migrants went ahead anyway, and some succeeded. Many ended up clashing with the authorities in Greece as riot police officers with batons, shields and masks tried to block their path, sometimes firing tear gas. The Turkish Interior Minister Suleyman Soylu claimed today that more than 76,000 people had left Turkey for Greece, a drastically inflated number, according to ground reports from both sides of the border. The United Nations estimated that about 15,000 people from several countries, including families with children, were on their way in Turkey to the northern land border with Greece. Hundreds of people crossed the Turkish border, either over farmland or the Meriç/Evros River. Nearly 500 others arrived by boat on the islands near Turkey in the north-eastern Aegean. The Greek government said it had thwarted thousands of crossing attempts in 24 hours and arrested 150 people over the weekend. Many got through as dozens of migrants in small groups could be seen scattered in the region’s villages on the Greek side. The Greek government claimed that most of the migrants trying to cross into Greece were not indeed Syrian and were single men. Pictures of the migrants at the border tend to back this claim, and it would seem that the desperate surge of Syrian refugees seen in previous years was not repeated here. This may be due to the fact that a large number of the Syrian refugees fleeing to Turkey had settled and found a new life in Turkey.

The developments on the Turkey-Greece border were increasing tensions between the two countries, leaving thousands of people exposed to winter weather and caught in an increasingly volatile situation. One migrant died from the cold overnight, according to other migrants, and others said they were stripped and badly beaten by Greek border guards or vigilantes,  an assertion that the Greek government has denied. The tough action initiated by the Greek authorities to repel the migrants is not permitted by European Union law and international protocols, but the Greek government said it would request special dispensation from the European Union. It accused Turkey’s behaviour, and said that “Turkey, instead of curbing migrant and refugee smuggling networks, has become a smuggler itself”. The president of the European Council is expected to visit the Turkey-Greece border area on Tuesday March 3rd with the Greek prime minister, and the European Union called for an urgent foreign ministers’ meeting to be held sometime this week to deliberate on the crisis.