Turkey faced with sanctions from both America and Europe 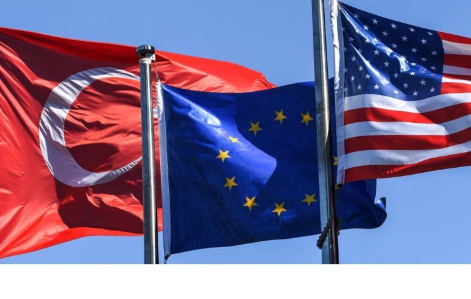 This week Turkey has been faced with implementation of sanctions from both the European Union and the USA.

At the Summit of the European Union summit in Brussels on December 10th-11th, it had been expected that some sort of sanctions would be imposed on Turkey. Before the European Council summit, European Council President Charles Michel had accused Turkey of playing a cat-and-mouse game that has to stop, and critics of Turkish President Recep Tayyip Erdoğan were expecting tougher sanctions in accordance with the consistent calls by EU member states; France, Greece and Cyprus. Erdogan retorted to the EU on the eve of the ostensibly fateful summit in a belligerent tone, saying he was not concerned about possible European sanctions as they would have no impact on Turkey. Yet he also emphasized that Turkey's strategic objective to become an EU member state remains unchanged, thereby creating false hopes and optimism.

After some bickering among the member states, the summit's conclusion text vis-a-vis Turkey fell considerably short of what France, Greece and Cyprus wished to see. The EU opted out of limited sanctions against Turkey for unilateral moves in the eastern Mediterranean and only slightly expanded previously approved sanctions against individuals and institutions involved in Turkey's hydrocarbon exploration activities in the contested waters of the eastern Mediterranean. The previous sanctions list that was drawn up during the bloc’s October summit was already very limited and largely symbolic, and the long-awaited outcome of the recent meeting did not go beyond that. The steps did not go far enough for Greece, with envoys saying the country expressed frustration that the EU was hesitant to target Turkey’s economy over the hydrocarbons dispute. The respected Greek daily Kathimerini conceded that the summit was a diplomatic loss for Greece, naming a number of EU member countries that pushed for a text to the liking of Erdogan. The Italians were particularly negative about the prospect of new sanctions against Ankara. The position of Greece and Cyprus was weakened by the apparent reluctance of France to insist on more substantial measures, while Austria also preferred the lukewarm wording of the original drafts.

It appears that the Europeans apparently want to deal with Turkey under Joe Biden’s presidency, as they hope to cooperate and coordinate with the United States in regard to Turkey. The EU is obviously aware of the fact that its influence in Ankara has diminished. The main European powers are clearly divided between France that denounces Erdogan’s policies and Germany that mostly seeks to appease Turkey. Germany has important arms deals and trade with Turkey. Regardless of these reasons, the arguably mild reaction of the EU to Turkey’s “belligerency in the eastern Mediterranean” and “provocations,” has presented a lifeline to Erdogan which will comfort him until the next European Council summit in March 2021.

The Turkish president seems quite confident that March 2021 would not be much different than December 2020 in regard to Turkey-EU relations. Speaking to reporters after the Friday prayer on December 11th, he praised those “reasonable countries” in the EU that prevented the Greek and French efforts. His self-confidence in dealing with the Europeans emanates mostly from his experience with the EU and the many European leaders he has known over the years.

The EU, without any doubt, could have inflicted severe damage on Turkey economically at a time when the coronavirus outbreak in Turkey is escalating and the country's crisis-hit economy is already ailing. However, the Europeans also fear an ultimate collapse of Turkey’s economy that would have a knock-on effect on Europe in terms of social, economic and political dimensions. Turkey’s ailing economy may be Erdoğan’s weakest link, but paradoxically provides political strength to him in his dealings with Europe.

Whereas the outcome on the European front did not cause any discomfort for Erdoğan, he was not so fortunate on the American front. The United States Senate today passed its annual defence spending bill mandating sanctions on Turkey. The American President Donald Trump had threatened to veto the legislation, but the bill was passed with a veto-proof majority of 84 to 13. The bill had previously passed in the congress by 335 to 78.

The bill includes a provision to force the US administration to enact long-awaited sanctions on Turkey within 30 days of the bill becoming law over the NATO ally’s purchase and test of the Russian S-400 missile defence system. It has been reported that the administration is preparing to sanction the Turkish government’s defence procurement agency, and possibly its chief, Ismail Demir, in a sign the Trump White House may be laying groundwork in case it loses the veto fight. At least five categories of sanctions have been approved against Turkey and Turkish officials under the Countering America’s Adversaries Through Sanctions Act, better known as CAATSA, which was originally passed in 2017 to limit countries and individuals from cooperating with defence, energy and other sectors of Russia, Iran and North Korea. It is not yet clear when the administration will formally impose the measures

President Erdogan had responded angrily to reports that Washington was planning on imposing sanctions over Turkey's purchase of Russian-made missile systems, saying that it would be “disrespectful” for the Trump administration to sanction a fellow NATO member. Ankara has said it purchased the Russian-made system only after the United States refused to sell it a high-end version of the Patriot missile defence system on acceptable terms.