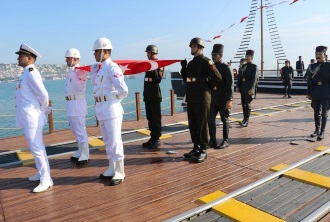 Today, May 19th, Turkey marked the centenary of Independence Day, which marks the beginning of Turkey's War of Independence and the emergence of modern Turkey, in a series of events and celebrations across the country.

May 19 is a milestone in Turkish history as it is the day when Mustafa Kemal, later to become Mustafa Kemal Atatürk, arrived in the Black Sea city of Samsun from Istanbul exactly one hundred years ago to organise the war of independence which resulted in the remnants of the Ottoman Empire being transformed into a modern Turkey four years later. Atatürk dedicated May 19th to the youth of the Turkish nation as Youth and Sports Day, a national holiday when young people stage sporting and cultural activities with official ceremonies across the nation.