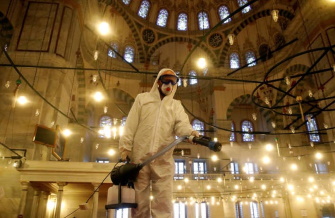 With new cases of coronavirus occuring in Turkey, new measures to counter the threat of the virus have been introduced by the Turkish government.

Turkey’s health minister Fahrettin Koca told a press conference in the capital Ankara today that the number of COVID-19 labs nationwide will be boosted to 16 and that diagnosis kits and protective masks will be sent to hospitals and universities in all cities free of charge. He said that Turkey has no coronavirus deaths yet, but that this could happen since there were patients with respiratory problems.

Turkey made additions to its flight ban list today, with flights now banned to the UK, Switzerland, Saudi Arabia, Egypt, Ireland, and the UAE as of 8 am (0500GMT) on Tuesday March 17th, bringing the total number to 20.

The government also announced today that all cafes, internet and nargille cafes, wedding venues, theatres, and cinemas are to close as of 12pm (2100 GMT Monday) on Tuesday March 17th.

The novel coronavirus emerged in Wuhan, China last December, and has so far spread to at least 146 countries and territories, with the World Health Organization declaring the outbreak a pandemic. According to Worldometer, a website that compiles new case numbers, out of roughly 176,000 confirmed cases, the death toll is nearly 6,700, while more than 77,500 of them have recovered. The current number of active cases is nearly 90,000, with 93% in mild condition, and 7% in critical condition.

Turkey yesterday announced the number of COVID-19 cases in the country at 18.