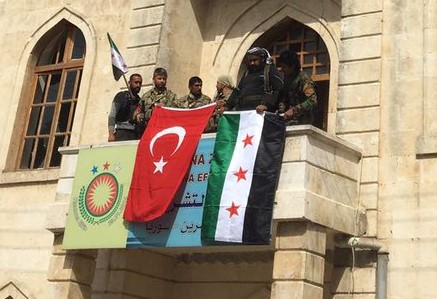 on the Kurdish controlled enclave. The advancing troops faced little resistance from the retreating Kurdish

the People’s Defense Units, or YPG, which Turkey views as a terrorist group linked to the outlawed Kurdistan

Workers’ Party, or PKK. The PKK is an organisation which has waged a decades-long insurgency within

push east after Afrin. Erdogan is threatening to move to Manbij, a Kurdish-run town to the east where U.S.

troops have also maintained a presence after it was cleared of Islamic State militants in 2016.

Washington’s support to the YPG, including arming the militia and relying on it to battle Islamic State

militants in eastern Syria, has strained relations between Turkey and the U.S. A push east could further

inflame tension. In an attempt to prevent such a move east, Washington began discussions to address

Turkey’s concerns about the Kurdish militia’s presence in Manbij. Turkey wants the YPG to pull out from the

Since the beginning of Turkey’s operation in Afrin, some 47 Turkish soldiers have been killed. The front-line

fighting has mainly been carried out by the Turkey-backed Free Syrian Army forces, with the Turks providing

It is not clear how Turkey’s “olive branch” operation will continue since the capture of Afrin. As the

Turkey-backed forces push forward east from Afrin, it is likely that they may well be confronted by Syrian

Government backed forces or by the Syrian Army itself. The status of America with regards its presence in

Manbij is also still not settled. Anything could happen.

Turkey has put a great deal of resources into its “olive branch” operation, which is understandably having a

will have a very heavy price to pay.