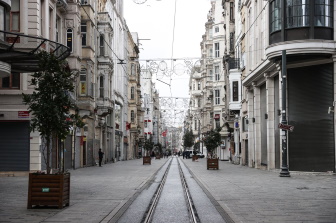 Turkish citizens will be required to stay mostly at home under a nationwide a 17-day "full lockdown" starting on Thursday April 29th and lasting until May 17th to curb a surge in coronavirus infections and deaths, Turkish President Tayyip Erdogan announced yesterday.

Turkey logged 37,312 new COVID-19 infections and 353 deaths in the last 24 hours, health ministry data showed, sharply down from mid-April but still the world's fourth highest number of cases and the worst on a per-capita basis among major nations.

Announcing the new measures after a cabinet meeting, Erdogan said all intercity travel would require official approval, all schools would shut and move lessons online, and a strict capacity limit would be imposed for users of public transport. Turks will have to stay indoors except for essential shopping trips and urgent medical treatment. Certain groups including emergency service workers and employees in the food and manufacturing sectors will be exempt. There is also to be a ban on alcohol sales which is likely to result in stock building by citizens before the Ramadan holiday which this year starts on Wednesday May 12th and continues for another three days until May 15th. The lockdown will severely dampen the festivities associated with the holiday, as people will no longer be able to visit relatives and celebrate in the fashion to which they are accustomed.

The new restrictions take effect from 1600 GMT on Thursday April 29th and will end at 0200 GMT on Monday May 17th.

"At a time when Europe is entering a phase of reopening, we need to rapidly cut our case numbers to below 5,000 not to be left behind. Otherwise we will inevitably face heavy costs in every area, from tourism to trade and education," Erdogan said. He added that the measures will be implemented "in the strictest manner to ensure they yield the results we seek".

Two weeks ago Turkey announced a night-time curfew from 7 p.m. till 5 a.m. on weekdays, as well as full weekend lockdowns, after cases surged to record levels, but the measures proved insufficient to bring the pandemic under control. Total daily cases in Turkey peaked above 63,000 on April 16 before dropping sharply to below 39,000 on Sunday. The total death toll in Turkey, a nation of 84 million, stood at 38,711 on Monday, the health ministry data showed.