Turkey and Germany try to normalise relations out of necessity 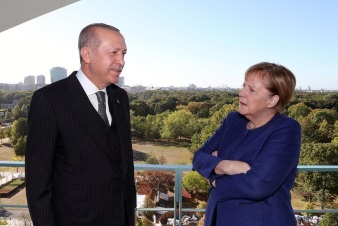 Turkish President Recep Tayyip Erdoğan made a three day state visit to the German capital of Berlin from September 27th to 29th, 2018. Following a meeting between Turkish and German ministers and senior officials headed by Erdoğan and the German Chancellor Angela Merkel on September 28th, Erdoğan and Merkel held a joint press conference. They both stressed the importance of the two NATO allies working together as they sought to improve relations between the two countries.

Erdoğan said that a consensus was reached “to revive cooperation mechanisms”, and that Turkey plans to fulfil the remaining six criteria regarding the visa liberalization process with the EU “as soon as possible.”

Merkel said she and Erdoğan talked about bilateral economic cooperation, and stressed “Germany has an interest in an economically stable Turkey.” She added that “There is, on the one hand, a common strategic interest in good relations, and on Germany’s part too an interest in developing these relations.”  She qualified this by saying that “on the other hand, on all questions of how a democratic, free and open society looks, there are also deep…. differences,” and that “I think this visit is significant because we can only clear up differences by talking to each other.”

Erdoğan called on Berlin to extradite what he said were the thousands of PKK militants and hundreds of supporters of FETÖ residing in Germany. He also urged Germany to designate FETÖ as a terrorist organization. Merkel replied that Germany considers the PKK a terrorist organization and prosecutes its members, saying that German authorities take Erdoğan’s information on FETÖ seriously “but we need more material - what we have is not enough for a similar status to the PKK.”

In the morning of September 29th , Erdoğan met with Merkel at a working breakfast to discuss bilateral and international issues, and to further strengthen the economic relations between the two countries. At the meeting, which lasted more than two and a half hours, the leaders also reviewed cooperation in addressing the refuge crisis, and exchanged views on the situation in Syria. Bilateral issues, including cooperation in fight against terrorism, were the other agenda items. Erdoğan was accompanied by Treasury and Finance Minister Berat Albayrak, Foreign Minister Mevlüt Çavuşoğlu, and Technology and Industry Minister Mustafa Varank.

The trip is Erdoğan’s first formal state visit to Germany since he became president in 2014 and gained more executive powers under new presidential system following the elections in June. Erdoğan wrapped up his trip on September 29th with a visit to the western Germany city of Cologne located in the western federal state of North Rhine-Westphalia, which has a large Turkish immigrant population. Here Erdoğan opened a new mosque built by the Turkish-Islamic Union for Religious Affairs (DİTİB). The Cologne-based DİTİB is one of the largest Islamic organizations in Germany. It was founded in 1984 as a branch of Turkey’s Presidency of Religious Affairs (Diyanet)

Germany, a country of over 81 million people, has the second-largest Muslim population in Western Europe after France. Among the country’s nearly 4.7 million Muslims, three million are of Turkish origin. Many of them are second or third-generations of Turkish families who migrated to Germany in the 1960s, and are well integrated in the country.