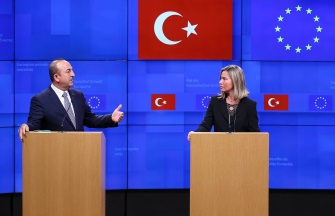 The following press release was made at the culmination of the 54th meeting of the Association Council between the European Union and Turkey in Brussels on March 15th,  2019.

“The EU-Turkey Association Council held its 54th meeting on Friday, 15 March 2019, in Brussels. The meeting was the first one held after the lifting of the State of Emergency in Turkey last year, and provided a useful opportunity to take stock of EU-Turkey relations and exchange views on a range of issues.

On the EU side, the meeting was chaired by the High Representative of the Union for Foreign Affairs and Security Policy, Ms Federica MOGHERINI. Mr Johannes HAHN, European Commissioner for European Neighbourhood Policy and

The EU reaffirmed the importance of the relations between the EU and Turkey, a candidate country and a key partner and stressed the importance of open and frank dialogue, within the established framework, in order to address common challenges in areas of joint interest such as migration, counter-terrorism, energy, transport, the economy and trade.

The EU underlined that the Turkish government’s stated commitment to EU accession needs to be matched by corresponding reforms and recalled that the Council conclusions of 26 June 2018 state that Turkey has been moving further away from the European Union and that accession negotiations have therefore effectively come to a standstill. The EU reiterated its concerns over the continuing and deeply worrying backsliding in the areas of fundamental rights and rule of law, and the deterioration of the independence and functioning of the judiciary. In this regard, the EU expressed its expectation from Turkey to ensure that its plans for judicial reform are realised in line with EU and Council of Europe standards.

The EU also deplored the increasing pressure faced by civil society, as demonstrated by the indictment of sixteen prominent activists late February and stated its concerns over the rapidly shrinking space for civil society, notably in the face of widespread arrests, including of journalists, and recurrent bans on demonstrations and other types of gatherings. The EU called on Turkey to urgently reverse all measures that have a negative impact on judicial independence, the rule of law, human rights and fundamental freedoms.

The EU immediately and strongly condemned the 15 July coup attempt. The EU also underlined the importance of a system of redress for those unjustly affected by the broad scale and collective nature of the measures taken in its aftermath.

The EU strongly commended Turkey's significant efforts in hosting and addressing the needs of approximately four million refugees and underlined that the continued implementation of the EU-Turkey Statement is in the interest of both sides and remains crucial with a view to bringing irregular migration to a halt. It welcomed the comprehensive and regular EU-Turkey political dialogue, which allows for further reviewing a broad range of foreign policy issues of common interest, notably as regards Syria, Iraq, Iran, the Middle East Peace Process, Libya, and the situation in the Gulf. The EU underlined that Turkey has an important role and responsibility within the wider region, and that enhanced dialogue, cooperation and alignment on foreign policy issues is crucial.

The EU also reiterated its position on good neighbourly relations, by recalling the March 2018 European Council conclusions on the Eastern Mediterranean and the Aegean Sea, and expressed its grave concern over recent statements by Turkey in relation to its planned drilling activities in Cyprus' Exclusive Economic Zone.

The EU welcomed the UN efforts to resume negotiations for the reunification of Cyprus, and recalled that it remains crucial that Turkey commits and contributes to the process and to a fair, comprehensive and viable settlement within the UN framework, in accordance with UNSC resolutions and in line with EU principles and the EU acquis.

Turkey is an important trade partner for the EU and the EU reaffirmed that the economic links between Turkey and the EU are strong. Noting the challenges faced by the Turkish economy, the EU stressed that the known vulnerabilities needed to be addressed to create stable economic and monetary conditions. Reviewing the relations under the Association Agreement and the Customs Union, the EU called on Turkey to ensure that the existing Customs Union functions in a non-discriminatory way towards all Member States. The EU also recalled the June 2018 Council conclusions, which state that no further work towards the modernisation of the EU-Turkey Customs Union is foreseen.

The EU also pledged its continued support for Turkey in its fight against terrorism, while stressing that all counter-terrorist actions must respect the principles of democracy, human rights and international law. The EU strongly urged a return to a credible and inclusive political settlement of the situation in the south east, based on genuine dialogue leading to a sustained political solution.”