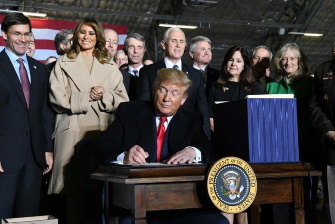 The defence bill was packed with additional measures aimed at Turkey that include a prohibition on transferring fifth-generation F-35 joint strike fighters, or its parts, to Turkey due to its purchase of the Russian S-400 anti-air missile system, and calls for Trump to implement sanctions on Turkey under the Countering America's Adversaries Through Sanctions Act (CAATSA). It further provides the Pentagon with USD 440 million to purchase the F-35 aircraft initially bought by Turkey.

Turkey's acquisition of the advanced Russian air-defence system prompted the Trump administration to remove Turkey from the F-35 program in July. The U maintains that the system could be used by Russia to covertly obtain classified details on the jet and is incompatible with NATO systems. Turkey, however, counters that the S-400 would not be integrated into NATO systems and would not pose a threat to the alliance.

Turkey reacted strongly against the US decision to remove it from the F-35 programme due to its purchase of the Russian S-400 system.

The defence bill also lifts a longstanding US arms embargo on the Greek Cypriot administration of southern Cyprus, but with the condition that Nicosia works with US authorities on money laundering and takes necessary steps to prevent Russian military ships from using the island for maintenance and refuelling.

The bill includes US sanctions against companies building the Nord Stream 2 and TurkStream  natural gas pipelines to Europe from Russia, since Congress fears that they will give the Kremlin dangerous leverage over European allies. The USD 11 billion Nord Stream 2 pipeline under the Baltic Sea aims to double deliveries of Russian natural gas to Europe's leading economy, Germany. The TurkStream pipeline will carry Russian natural gas along a Russia-Turkey pipeline crossing the Black Sea. Sanctions include asset freezes and revocations of US visas for the contractors.