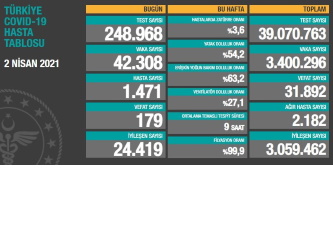 According to daily statistics announced by the Turkish Ministry of Health, the number of daily cases continues to rise and the 40,000 threshold having been crossed on April 1st, the number of cases for April 2nd has been given as 42,308, with 179 deaths. The situation has resulted in the government re-imposing restrictions on movement over this coming weekend, despite previous plans to ease restrictons.

This third wave of the pandemic is causing serious concern ahead of the tourism season, and is proving that the government is losing control of the situation despite the gradual implementation of vaccines. The government has already come under strong criticism for allowing congresses and meetings of its ruling party to be held in recent weeks. The Turkish population is suffering from an on-going economic recession and the restrictions on movement will only add to their economic woes.