Tender for Canal Istanbul project to be offered in coming weeks 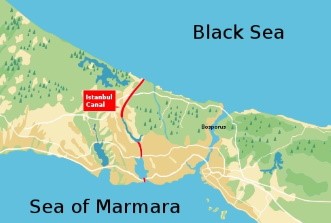 Turkish President Recep Tayyip Erdoğan announced at a conference in the Istanbul Congress Center that Turkey will hold a tender for Canal İstanbul,  a mega-infrastructure project involving the construction of a 45 kilometre shipping canal in Istanbul parallel to the Bosphorus Strait, in the coming weeks. Erdoğan’s announcement in his speech was to some extent in response to the comments on December 19th of the opposition leader of the Republic People’s Party Kemal Kılıçdaroğlu, who said that they will cancel the project once they came to power.

Canal Istanbul has been on the government’s agenda since 2011, but its realisation has been delayed several times due to financial problems and environmental concerns. The most recent postponement was announced in 2018 during the financial crisis that year. However, in recent weeks, Erdogan has put building of ‘Kanal Istanbul’ back atop his domestic agenda. The government has said the canal will be 45 kilometres (nearly 28 miles) long, 25 metres (80 feet)) deep, and 440 metres wide (but at some points increasing up to one kilometre). It will start at Lake Küçükçekmece, a naturally formed lagoon on the Marmara Sea coast west of Istanbul, go north through the Sazlıdere Dam, and connect to the Black Sea to the north between the Durusu Terkos reservoir and Istanbul Airport. Soil excavated to form the canal will be used to build three artificial islands in the Marmara Sea. When completed, the canal will turn the densest part of the city, including its historic centre, into an island.