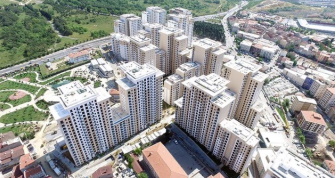 According to figures prepared by the Turkish Statistical Institute (TÜİK – Türkstat), domestic property sales in general in Turkey, that is including both Turkish and foreign nationals, increased by 5.1% in August 2019 to 110,538 units compared with the same month of the previous year. Following the slump in the property market over the last year or so, this is a welcome development. Mortgage sales, which made up 30.9% of all property sales, increased by 168% in August, and the lower bank mortgage loan rates would have been the main reason for this improvement.

It should be noted though that the number of property units sold for the first time, which made up 36.8% of total property sales, fell by 17.7% in August 2019 compared with the same month of the precious year. There was an increase of 25.3% for used property in August 2019.

Property sales to foreigners in August 2019 were 3,604 units, 3.3% of the total, and 6.8% lower than the figure for the same month of the previous year. There is still strong demand by foreigners for property in Turkey, though monthly figures are well below the sales record of 6,276 units in the month of October 2018.