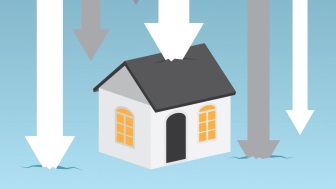 According to figures prepared by the Turkish Statistical Institute (TÜİK – Türkstat), domestic property sales in general in Turkey, that is including both Turkish and foreign nationals, fell by 48.6% in June 2019 to 61,355 units compared with the same month of the previous year. Property sales to foreigners in June 2019 were 2,689 units, 4.4% of the total, and 30.5% higher than the figure for the same month of the previous year, though much lower than the record figure of 6,276 units for the month of October 2018.

The deepening economic crisis in Turkey is clearly being reflected by the dramatic fall in property sales. With withering demand, the Turkish construction industry has been forced to halt new projects and is facing tremendous difficulties in completing and marketing projects in process. Many construction companies have had to be supported by banks with prodding from the Turkish government to prevent them from going into liquidation. This situation does not apply to sales to foreigners who comtinue to show keen interest as a result of falling property prices, the incentive of Turkish citizenship, and the weak Turkish lira.