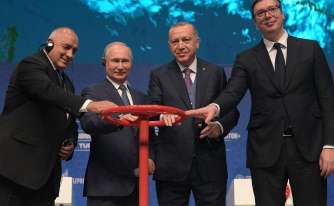 The TurkStream pipeline, which is owned by Gazprom and Botas, and estimated to have cost USD 8 billion, will transport 31.5 billion cubic meters per year (Bcm/y) of Russian natural gas via the Black Sea. The project has two pipelines, the first transporting gas to Turkey and the second transporting gas to south-eastern Europe, through Bulgaria, Serbia, Hungary and on to Austria. The new pipeline route elevates the role of Bulgaria as a new regional gas hub, as it is now at the centre of a new distribution network. TurkStream will help to allow Gazprom to fulfil its long-term plan to halt gas flows through the existing Transbalkan pipeline running from Russia across Ukraine, Romania, and Bulgaria to Turkey and Greece. The conflict in Ukraine, and the resultant tension between Ukraine and Russia, have resulted in serious problems in delivery of gas through the Transbalkan pipeline and Russia therefore wants badly to abort this route.

From Bulgaria, incoming gas from TurkStream may flow to Romania, Ukraine, Greece and North Macedonia via the existing Transbalkan pipeline, as well as to Serbia and Hungary using a new dedicated onshore pipeline connection, which is expected to be completed before the end of 2020. Besides halting the flow of gas into the Transbalkan pipeline, Gazprom has significantly reduced the flow of gas via the Soyuz gas pipeline network that runs across Ukraine to Poland, Germany and Slovakia, despite signing a new five year gas transit agreement with Ukraine at the end of December 2019. In anticipation of the full halt in transit flows across Ukraine in January 2020, Russian gas giant had pumped billions of cubic metres of gas into European storage facilities during the second half of last year. This excess of gas, together with a mild winter in Europe, means that the Russian gas monopoly is facing a lower than expected gas demand on its core export market.

Turkey has been importing Russian gas for some three decades, first via the Trans-Balkan pipeline, and then by the direct Blue Stream line. The TurkStream project, which was temporarily halted during a frosty patch in Russia-Turkey relations in 2015, links Anapa in Russia to Kıyıköy in northwestern Turkey through two parallel 900 kilometre long pipelines. Deliveries of gas have already started to the Bulgaria hub earlier this week. It is expected that the TurkStream project will bring Turkey and Russia closer together politically, in addition to giving Putin more leverage in the region. With this new pipeline, Turkey has evolved into a major hub for transition of natural gas and petrol, especially following the recent inauguration of the Trans-Anatolian Natural Gas Pipeline, which transports gas from Azerbaijan through Turkey and on to European markets.

As part of its efforts to increase gas supplies to Europe without having to rely on Ukraine, Russia is also constructing a pipeline under the Baltic Sea, connecting it directly to Germany. This project, called Nord Stream 2, has been delayed due to US sanctions on contractors. Nord Stream 2, spearheaded by Russia’s state-owned energy company Gazprom, is nearly completed and has the same annual capacity as the first pipeline route which almost runs parallel to it. Together they will meet the annual gas demands of a quarter of the European continent. Delays on Nord Stream2 has given added importance to TurkStream.

Though TurkStream has been completed and now in operation, there are a number of problems facing Turkey which will need to be resolved. For example, it has been claimed that Turkish consumers will not immediately benefit from the discounted energy prices normally afforded to transit countries. In EU markets, the average price for Russian gas is about USD 220 per 1,000 cubic metres, while the Turkish market will pay about USD 305 for the same quantity via the TurkStream pipeline. It would appear that though Turkey is Russia’s second biggest gas client after Germany, Turkey still has not been able to obtain a discount due to the negotiating process having been compromised by a number of political issues. For example, Ankara officials were forced to make significant concessions when negotiating terms for the TurkStream project in order to restore Turkish-Russian relations following the shooting down of a Russian jet by Turkey near the Syrian border in 2015. The 2016 failed coup attempt in Turkey also weakened Turkey’s position and diverging Syria strategies have strained Turkish-Russian relations once again. At the same time, Turkish imports of Russian gas through existing infrastructure have declined amid an ongoing economic recession that has seen Turkish consumers cut back on energy usage. In 2017, Turkey imported 28.6 billion cubic metres from Russia, while in 2018 imports fell to 23.6 billion before sliding further throughout 2019. However, alternative gas sources will be needed to offset energy imports from Iran that Turkish officials are halting to comply with US sanctions on Tehran.

There has also been some concern over the potential impact of new sanctions introduced through the Washington’s 2020 National Defence Authorisation Act (NDAA), which includes penalties for companies engaged in pipe-laying services for the construction of the Nord Stream 2 and TurkStream pipelines. However, as the underwater construction phase of the TurkStream pipeline is complete, such sanctions may not impact Turkey and are more likely directed toward the Nord Stream 2 project. The USA is extremely concerned that the Nord Stream 2 and TurkStream pipelines would help Russia increase its leverage not just over eastern Europe through an expanded energy supply network that can isolate traditional transit nations such as Ukraine, Poland and Belarus, but also over Europe as a whole by weakening the EU and NATO.