Increase in Covid-19 cases threatens flow of tourists to Turkey 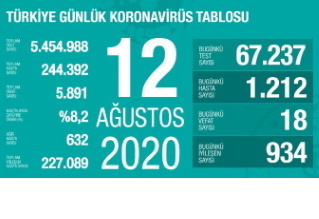 An increase of daily new Covid-19 cases to over 1,000 in the last few days has come just at a time when some countries, important for Turkish tourism, are allowing their citizens to travel to Turkey. The UK has allowed its citizens to travel to Turkey from July 10th without quarantine on return. Germany announced that it was allowing its citizens as of August 4th to travel to the four Turkish provinces of Izmir, Muğla, Aydın and Antalya, and Russia decided that it would start flights to Istanbul and Ankara on August 1st, and to Antalya, Dalaman and Bodrum on August 10th.

The daily new Covid-19 cases ,n Turkey have been declared as just below 1,000 for over the last month or so, but comments from doctors that there were no longer any beds available in their hospitals due to Covid -19 cases forced the Turkish Health Ministry to take another look at its figures. The Ministry duly announced that there was a deteriorating situation pushing the daily figures above 1,000.

With its tourism sector in mind, Turkey has opened its flight routes to countries wherever possible except for some countries where the Covid-19 has not been brought under an acceptable level of control. For example, Turkey suspended flights to Iran and Afghanistan on July 19th due to Covid-19 concerns.

With Covid-19 cases increasing, the Turkish authorities will no doubt be making added efforts to deter the spread of the virus in light of the risk of countries reversing their policies allowing their citizens to come to Turkey.