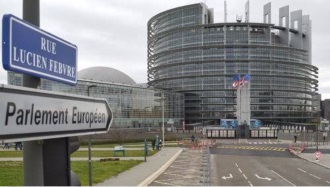 The European Parliament has voted in favour of formally suspending EU accession talks with Turkey, citing severe political and democratic backsliding under President Recep Tayyip Erdoğan. This vote, which was rejected by Turkey as “worthless” and “discriminatory”, is non-binding and only advisory, since the EU governments would have to vote by majority to end Turkey's EU accession bid. It was nentheless still a sharp rebuke of Turkey, whose long-running bid to join the affluent bloc has been bogged down for years over its slow pace of reforms, a lack of a settlement on Cyprus and Europe’s reluctance to admit a populous Muslim nation. Turkey began formally negotiating its entry into the EU in 2005.

Lawmakers passed the symbolic nonbinding resolution with 370 votes in favour, 109 against, and 143 abstentions. In a statement, the Strasbourg based assembly said that "The European Parliament remains seriously concerned about Turkey’s poor track record in upholding human rights the rule of law, media freedom and the fight against corruption, as well as its all-powerful presidential system."

Kati Piri, a socialist Dutch lawmaker and EU rapporteur on Turkey, said in her speech in the assembly that repeated European calls for Ankara to respect fundamental rights have "fallen on deaf ears." She added that "On top of the severe human rights violations, the dismantling of the rule of law and the fact that Turkey holds the world record for the number of journalists in jail, the recently amended constitution consolidates Erdogan's authoritarianism."