EU imposes sanctions on Turkey over its drilling for gas 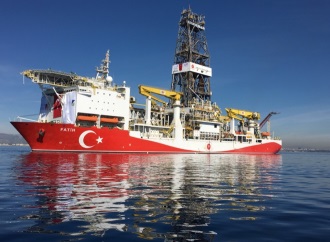 EU ministers today approved sanctions against Turkey over its drilling for hydrocarbons off the island of Cyprus in the Eastern Mediterranean in waters where it believes EU member Cyprus has exclusive economic rights. They said they were suspending talks on the Comprehensive Air Transport Agreement, which regulates regional commercial flights, as well as high-level Turkey-EU dialogues, and would call on the European Investment Bank to review its lending to the country, which totalled USD 434 million in 2018. They also backed a proposal by the EU’s executive branch to reduce pre-EU accession financial assistance to Turkey in 2020, and warned that additional “targeted measures” were being worked on to penalise Turkey.

Two Turkish vessels escorted by warships are currently drilling for gas on either end of ethnically divided Cyprus, and a third ship is in the area.

The EU ministers repeated the "serious immediate negative impact" that Turkey's illegal actions are having on EU-Turkey relations and called on Ankara to respect Cyprus' sovereign rights in line with international law. They also welcomed the Cypriot government's invitation to Turkey to negotiate the borders of their respective exclusive economic zones and continental shelf. However, state leaders in the Republic of Cyprus have maintained that discussions of energy cooperation and revenue sharing on the island can only begin after a comprehensive reunification settlement. To date, despite many talks and even a referendum for a unification plan which the Greek Cypriots turned down, such a settlement has proven elusive.

Cyprus was split along ethnic lines in 1974 when Turkey invaded in the wake of a coup by supporters of a union with Greece. A Turkish Cypriot declaration of independence is recognized only by Turkey, which keeps more than 35,000 troops in the breakaway north. Cyprus joined the EU in 2004, but only the internationally recognized south enjoys full membership benefits.

Turkey contends that it's protecting its rights and those of Turkish Cypriots to the area's hydrocarbon deposits. Cypriot officials, however, accuse Turkey of using the minority Turkish Cypriots in order to pursue its goal of exerting control over the eastern Mediterranean region. The Cypriot government says it will take legal action against any oil and gas companies supporting Turkish vessels in any attempt to drill for gas. Cyprus has already issued around 20 international arrest warrants against three international companies assisting one of the two Turkish vessels now drilling 42 miles (68 kilometres) off the island’s west coast.

The Turkish foreign minister Mevlüt Çavuşoğlu responded to the EU sanctions in a news conference in North Macedonia. Çavuşoğlu rejected the sanctions as “worthless” and vowed to send a new vessel to the eastern Mediterranean to reinforce its efforts to drill for hydrocarbons off the island of Cyprus. He said that the sanctions were taken under pressure from the Greek Cypriots and Greece.

Turkey's foreign ministry, in a statement given on July 10th, had rejected claims by Greek and European Union officials that Turkish drilling for gas and oil off Cyprus was illegitimate and said the EU could not be an impartial mediator on the Cyprus problem. The ministry said that in addition to protecting its own continental shelf rights in the Eastern Mediterranean, “Turkey will continue to defend Turkish Cypriots' rights and interests around the Island”.

The ministry reminded that Turkey's drilling ship Fatih had begun its activities earlier in May this year in an area 75 kilometres (42 nautical miles) off the western coast of the island of Cyprus, where the Turkish government had granted licenses to Turkish Petroleum in 2009 and 2012 within our continental shelf in the Eastern Mediterranean as notified to the United Nations, and that the country's second drilling ship Yavuz had been deployed in the south of the Karpas peninsula.  The ministry said that Yavuz "will operate on behalf of the Turkish Cypriots within the license areas granted by the Turkish Republic of Northern Cyprus (TRNC) to Turkish Petroleum in 2011."