Erdoğan and Putin agree Syria ceasefire at meeting in Moscow 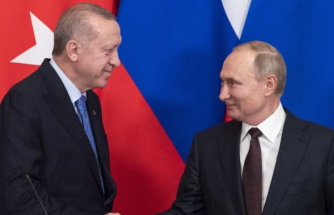 The Turkish and Russian presidents have reached agreement on a ceasefire to begin at midnight Thursday March 5th in north-western Syria, where escalating fighting has threatened to put forces from the two countries into direct conflict. The deal struck by the Turkish President Recep Tayyip Erdoğan and his counterpart Russian President Vladimir Putin, after talks in Moscow on Thursday, which lasted for six hours, would also set up a security corridor along a key east-west highway in Idlib province. Both sides stated that they hoped the agreement would serve as a good basis for ending the fighting in the Idlib de-escalation zone, put an end to suffering of civilian population and contain a growing humanitarian crisis.

The agreement appears to achieve Russia’s key goal of allowing the Syrian government to secure control over strategic highways essential for consolidating its grip on the country after a devastating nine-year war. In Turkey’s interests, the deal also puts the brakes on the push by Syria’s president, Bashar Assad, to reclaim control over all of Idlib province, the last opposition-controlled region that borders Turkey. Erdoğan said he and Putin had agreed to help refugees return to their homes and established safe corridors for this purpose. More than 900,000 people have been displaced by the fighting since Assad’s forces began an offensive in December backed by Russian airstrikes. With nowhere to go, many have crowded at the border with Turkey, which already hosts more than 3.5 million Syrian refugees and refuses to allow others in. An estimated total of 3 million refugees are trapped in rebel held north-west Syria, and since they are from Syria’s Sunni population unfriendly to Assad, the latter would be more than happy to see them settle in Turkey.

Recent developments in the conflict in Syria’s Idlib brought Turkey, a Nato member, dangerously close to war with Russia. For Turkey, which has sent thousands of troops to Syria in the past few weeks, the intervention has been disastrous: 58 soldiers were killed in the past month, including 33 in an airstrike last week. Erdoğan and Putin have met repeatedly in recent years to coordinate their moves in Syria. In September 2018, they struck a de-escalation deal on Idlib that averted a Syrian offensive. The agreement created a security zone free from heavy weapons that was monitored by Turkish troops. However, the pact ultimately collapsed. In October, an agreement between the two leaders carved up the region further east along the border, with each deploying forces to fill the void after Donald Trump’s order to withdraw US forces there.

Putin has now signalled Russia’s willingness to accommodate Turkish security concerns. Having secured Moscow’s interests and those of his Syrian allies by recapturing key cities as well as gas and phosphate reserves, he could afford to appease Erdoğan to some extent on Idlib. Erdoğan’s biggest leverage with Putin is Moscow’s desire for strong ties with Turkey to counterbalance US influence in the region. Both sides also do not want to damage their bilateral relations and blossoming trade.

Of major concern to Erdoğan is the potential influx of some additional 3 million Syrian refugees to Turkey. This would put an intolerable burden on Turkey already home to more than 3.5 million refugees. In desperation, Erdoğan  threw open Turkey’s borders with Greece and said he would no longer prevent migrants and refugees from entering Europe in order to get NATO support against the Syrian military offensive. Some European leaders have accused him of trying to blackmail the West into backing Turkey.