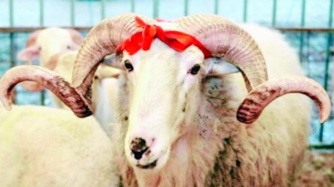 Turkey’s Eid al-Adha (Feast of Sacrifice – Kurban Bayramı)  starts this year on Sunday August 11th and lasts for four full days. The Kurban Bayram is preceded by Arife day which allows people to prepare for the festivities. Arife starts at midday and the afternoon is an official holiday, with banks for example only open until midday. Since Arife this year coincides with a Saturday, the whole day is in any case a weekend holiday. This year, the Kurban Bayram has not been extended in order to allow citizens to enjoy a 9 day holiday, including weekends. The Turkish government is now not faced by any elections for four years, and so is not inclined to give any added incentive to the electorate. The current economic recession is also a major reason for not reducing working days.

The Feast of Sacrifice, which lasts for four days and is known as Kurban Bayramı in Turkey, is one of the oldest Islamic holidays. It commemorates the story about Prophet Ibrahim (Abraham) who showed obedience to God by agreeing to sacrifice his son. God then sent him a ram to be sacrificed instead. The Feast of Sacrifice comes about 70 days after the Ramadan Feast. According to old belief it is unlucky to get married or start a new business in the period between these two holidays.

Traditionally, on the first day of the Feast of Sacrifice in Turkey, men of each family go to a mosque for a special morning prayer. Then the sacrifice ritual begins. In some regions in Turkey, people paint the sacrificial animal with henna and adorn it with ribbons. The butcher reads a prayer before slaughtering the animal. Families share about two-thirds of the animal’s meat with relatives and neighbours, and they traditionally give about one-third to the poor. In recent years, some Turkish people started making donations to charity organizations instead of sacrificing animals. Many people in Turkey take special care to help the poor during the Sacrifice Feast.

People usually wear their best clothes during the Feast of Sacrifice. They welcome guests to their homes or visit relatives or friends during the holiday. Many people in Turkey reserve the first day of the feast for visiting their closest relatives. Young people greet their older relatives and neighbours by kissing their hand as a sign of respect. Some people in Turkey may use the four-day holiday to go on vacation.

The Feast of Sacrifice is an official four and a half-day holiday in Turkey. Administration buildings, schools, banks and post offices are usually closed during this period. Supermarkets remain open, but may work on a special holiday schedule.

Public transport may run less frequently during the Sacrifice Feast, and fares are usually lower compared to regular days. Highways, and bus, train and airport terminals will be very congested at the start and end of the Feast holiday period  due to holiday travel. Because the beginning of the Sacrifice Feast coincides with the end of Hajj, the annual pilgrimage to Mecca, both domestic and international travel in Turkey may be intense during this period.

The Feast of Sacrifice takes place in the four days following the 10th day of the Islamic month of Dhu al-Hijja. The exact dates are determined using the Islamic calendar, whose months begin with the first sighting of a new moon. The Islamic calendar begins its count from 622 CE, the year in which Prophet Muhammed (the Turkish spelling) moved from Mecca to Medina. This calendar has been in use since about 640 CE.