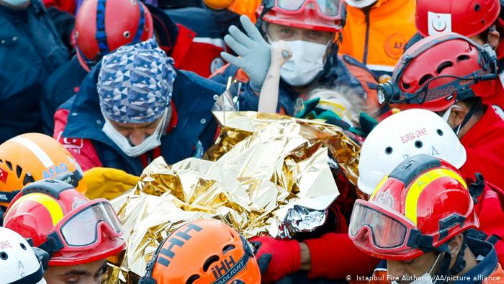 An earthquake with a magnitude of 7.0 on the Richter Scale was recorded on Friday October 30th, 2020, about 14 kilometres north-east of the Greek island of Samos and an equivalent distance south of the Turkish coast near Seferihisar. Dozens of buildings were either damaged or completely collapsed as a result of the earthquake. The city of Izmir was heavily affected. As was the island of Samos itself, where the Church the Assumption of Mary in Karlovası partially collapsed. Emergency services in both countries immediately responded and attended the scene, and rescue efforts started in earnest.

In Turkey, 116 people, almost all in Izmir, are known to have died, with 1,034 more injured. In Greece, there were two fatalities and nineteen minor injuries.

Many residents of Izmir have shown solidarity with people who have been left homeless, bringing them food and clothing. Izmir looks like a huge refugee camp. Disaster and emergency management officials and the community quickly improvised temporary roofs to shelter the people who were displaced when more than a dozen buildings crumbled in Izmir, which, with more than 3 million people, is Turkey's third-most-populous city. Tents are pitched everywhere. Using tape, the police have cordoned off buildings with cracked facades or that are otherwise unsound.

The earthquake also triggered a small tsunami that hit Samos and Seferihisar, where one elderly woman drowned. The tremors were felt across western Turkey, including in Istanbul, as well as in the Greek capital of Athens. Hundreds of aftershocks followed. Following the wholesale collapse of buildings in Izmir, the authorities detained nine people , including contractors, for questioning over the collapse of six of the buildings. Turkey has a mix of older buildings and cheap or illegal constructions that do not withstand earthquakes well. Regulations have been tightened to strengthen or demolish older buildings, and urban renewal is underway in Turkish cities, but experts say it needs to be faster. The country sits on top of two major fault lines and earthquakes are frequent.