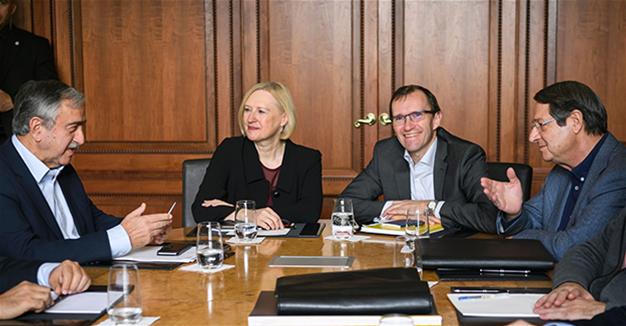 island was split up in 1974. Two days of talks at the Swiss resort of Mont Pelerin came to nothing and the

going home to reflect on the talks, that “Despite their best efforts, they have not been able to achieve the

phase of the talks.” Diplomats saw these talks as the most promising opportunity to reunite the island, but

the latest impasse raises serious questions over the prospects for a deal.

island. The two states would run most of the island’s affairs. The talks were supposed to produce a map

deal by early next year. Mr.Nicos Anastasiades, the Greek Cypriot President, and Mr.Mustafa Akıncı, the

Turkish Cypriot leader, are said to have established a close personal rapport since the beginning of the

talks under the chairmanship of UN envoy Espen Barth Eide, a former foreign minister of Norway.

the end of the process. The withdrawal of 35,000 Turkish troops stationed on the island is a Greek Cypriot

precondition for any settlement. There was concern that the Turkish President Recep Tayyip Erdoğan

might withhold his support for a deal following the failed coup attempt in Turkey. However, Ankara

following the coup. Erdoğan had indeed backed a failed UN plan in 2004 to unify the island. The deal was

made and was put to a referendum. The plan was supported by a majority of Turkish Cypriots  but

rejected by the Greek Cypriots.

On the breakdown of the talks in Switzerland yesterday, both Ankara and Athens have stated their

desire for talks to continue. The Turkish Foreign Ministry called for an immediate five-party conference,

with the participation of Turkey, Greece and the United Kingdom as guarantee powers, along with the

Both the Greek Cypriot and Turkish Cypriot sides blamed each other for the breakdown in the talks.