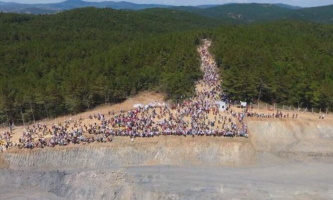 Thousands of people descended on a Canadian goldmine site in the province of Çanakkale in northwestern Turkey to protest against deforestation carried out for the project after distressing images of the expanse of the devastation caused by the site were shared online. The controversy has developed into a major domestic political issue in Turkey. Istanbul’s mayor Ekrem İmamoğlu said that he had spoken to the Canadian Ambassador Chris Cooter to stress the damage to the environment caused by this project.

The Canadian mining company Alamos Gold Inc., a Toronto-listed Canadian company with a market value of USD 2.8 billion and with a significant part of its future production planned in Turkey, acquired the site near the town of Kirazlı in 2010, and has since then been carrying out feasibility assessments for the project. The plan has however met with fierce opposition from people living in the area and across the whole country. Earlier this week saw some 5,000 people demonstrate on the vast patch of bare earth where trees had been cut down for the project.

Activists formed what they call a ‘Vigil for Water and Conscience’, and have been camping for more than 10 days near the mine outside Kirazlı. They say that heap leaching, the process used by the mining company to separate gold from ore, could damage the surrounding environment and the nearby Mount Ida, or the Kaz Mountains, as the area is known locally. Heap leaching is a process that uses a cyanide solution to dissolve the gold and extract it from its ore. Locals worry that cyanide could leak into and pollute the local Atikhisar dam, which provides water to over 180,000 people and irrigates over 5,000 hectares of land.

The Turkish government has rejected charges that the mine will damage the environment, has denied that Alamos Gold Inc. would be using cyanide in its extraction process – despite the company’s website clearly detailing it employs a “dilute cyanide solution”, and has stated that the Canadian firm will replant trees in the area when the mining project is shut down after six years. Doğu Biga, a Turkish subsidiary of Alamos Gold Inc., said that all of the work carried out so far had been done “within the framework of forestry and environment permits”. The company announced that 13,400 trees have so far been cut down out of a 46,000 target. TEMA, a charitable group, has claimed that 195,000 trees had in fact been cut down for the project.

In an interview in Ankara, Alamos CEO John McCluskey told Reuters that protests against the project were based on politically-motivated misinformation. He said that the area at the site now largely stripped of trees would begin to return to its previous state after the six years envisaged for the project. He added that as part of the forestry permit, which included a large proportion for reforestation, they had paid about USD 5 million, and that only government authorities were allowed to cut trees. McCluskey said that “In six and a half years, the whole focus of this area will be to replant. And in a decade, maybe a bit more than that, it will look like a forest again.”

With regards the use of cyanide, McCluskey said that it would only be used in the final step of the process to extract gold, and that the company had taken measures to ensure there would be no leaks into the environment and affect the watershed. “Not only do we make that impossible, if we didn’t make that impossible we shouldn’t even start, because by the time you’ve added the cyanide to the process it’s because there is gold there. And if you lose the cyanide, you lose the gold,” he said. He stressed that it was impossible for the mine to affect the Atikhisar dam because the mining solution would have to flow uphill to reach a separate watershed