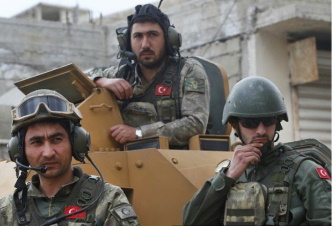 At least 33 Turkish soldiers have been killed and some 60 wounded, 16 with serious injuries, in a Syrian government attack in the evening of February 27th in opposition-held north-western Syria, creating fears of a major escalation of the conflict with the risk of Turkey, a Nato ally, coming into direct confrontation with Russia.

Apparently, at around 5 pm on February 27th, a Turkish mechanized infantry battalion, comprising of about 400 soldiers, became the target of an airstrike on a road between al- Bara and Balyun, some 5 kilometres north of Kafr Nabl in southern Idlib. It is alleged that two Russian Sukhoi Su-34 and two Syrian Su-22 fighter jets had launched intensive bombings of Turkish-backed Syrian National Army (SNA) targets in southern Idlib at around 11 am that day, and that the same jets hit the Turkish convoy in coordinated action. The attack by the jets forced the convoy to stop and for the soldiers to take shelter in several roadside buildings. It is likely that KAB-1500L bombs,  a variation of advanced laser-guided bunker buster bombs capable of penetrating to depths of up to 20 meters, were then dropped by the Russian jets. Two of the buildings collapsed in the attack, leaving the Turkish soldiers under the rubble.

After the attack, Moscow rejected Ankara’s request to open the Idlib air space to Turkish helicopters to airlift the casualties. As a result, the dead and the wounded were transported by road to a hospital in Reyhanli, a Turkish border town about 70 kilometers (43 miles) from the area. It is not known whether some Turkish soldiers remained buried in the rubble, but it is estimated that the final death toll is between 50 and 55.

Turkey, which backs the opposition in the Idlib province to the Syrian army, claims that it has hit 200 government targets in retaliation, "neutralising" 309 soldiers. This figure was disputed by Syrian government officials, but it is clear that Turkish drone and artillery attacks were very effective in halting further advances by the Syrian army.

The Russian and Turkish presidents spoke by telephone after the incident and both expressed concern and agreed on the need for "additional measures" to normalise the situation, with the possibility of a summit in the near future. Russia denies its own forces were involved in the fighting in the Balyun area where the Turkish soldiers were killed.

Syrian government forces, supported by Russia, have been trying to retake Idlib from jihadist groups and Turkish-backed rebel factions based there. The attack came after Turkish-backed rebels retook the key town of Saraqeb, north-east of Balyun. Idlib is the last Syrian province where Syrian rebel groups still control significant territory. Millions of Syrian civilians, many of whom have fled from other parts of Syria, are trapped in the Idlib province. Since the Syrian army, supported by its Russian and Iranian allies, has started its offensive from the south and east, traffic has become heavy on the roads heading north through the Idlib province towards the Turkish border.

In order to rally Nato support for attempts to stop Syrian army military aggression in the Idlib province of Syra, Turkey has announced that it will no longer stop Syrian refugees from crossing from Turkey to Europe.