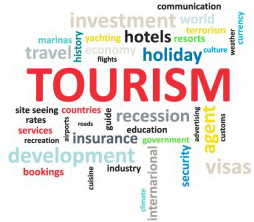 Turkey is a beautiful country with a unique geographical location. Being on the border between Europe and the Middle East, it offers the modern outlook of the West as well as the exotic flavours of the East. It is surrounded by seas on three sides, and is both a Mediterranean and a Black Sea nation. It offers every climate, from the snow covered mountains of Anatolia, to the moist and green Black Sea, to the warm mildness of the Aegean, to the hot sandy beaches of the Mediterranean coast. It has something of everything for everyone.

Turkey is currently the 10th most popular tourist destination in the world with some 38.6 million foreign visitors in 2017. In 2012 however, Turkey was the 6th, but geopolitical tensions caused a serious setback in Turkey’s tourism industry in 2016, from which the industry only began to recover in 2017. As the result of the shooting down of a Russian fighter plane in 2015 by Turkey, Russia introduced sanctions against Turkey towards the end of 2015. These sanctions included the halting of charter flights to Turkey from Russia. Since Russian tourists made up a large proportion of tourists going to Turkey’s Mediterranean resorts, the effect on Turkey’s tourism industry was disastrous. The Antalya resort was especially hard hit. Russians are seen as more generous spenders, and their absence also seriously affected the retail trade in jewellery, furs and other products favoured by tourists. During 2015 and 2016, Turkey was also the target for bombings by terrorist groups and on July 15th, 2016, Turkey endured a failed coup attempt. In 2016, foreign visitors to Turkey collapsed by 24.6% to some 31.4 million With the reconciliation of Turkey and Russia towards the end of 2016 and an improvement of the internal security situation within Turkey, tourists began to flow back in 2017, but the 2017 figure of 38.6 million foreign visitors was still below the 2015 high of 41.6 million. The number of cruise passenger liner ships calling in at Turkish destinations has fallen drastically over the last two years due to security concerns, and it will take a number of years to persuade cruise operators to add Turkish destinations back to their cruise programmes.

The total revenue earned by the Turkish tourist industry in 2017 was USD 26.3 billion, up 18.9% from the figure for 2016. Revenue earned per foreign visitor was down to USD 681 in 2017, and compares with USD 705 in 2016 and USD 756 in 2015. The fall in revenue per capita in 2017 was largely due to Turkish hotels having to drastically reduce their prices to attract back custom. The improvement in foreign visitor numbers in 2017 was therefore greatly offset by the fall in room rates. It is hoped that this anomaly will be corrected in 2018. The fall in revenue per foreign visitor started from 2014 with the high of USD 828 in that year. Compared with other tourist destinations in the world, revenue per foreign visitor in Turkey is low also as a result of the inclusion of Turkish nationals living abroad, many of which are in Europe, totalling some 6 million per annum. Many visitors also come from neighbouring countries for short shopping visits. Both sources will spend much less on accommodation compared with visitors from further afield. It is also necessary to note that a large proportion of hotels in Turkey, especially the large tourism resorts on the Mediterranean coast, offer all-inclusive deals which reduce profit margins but ensure full capacity use.

In the website of the Republic of Turkey Prime Ministry Investment Support and Promotion Agency’s  (ISPAT), the following data was given about Turkey’s tourist industry :

"  **  By the end of 2017, there were 12,856 registered accommodation facilities. 9,186 of these facilities were licensed by their respective municipalities, while the    remaining 3,670 held tourism operation licenses. The combined total bed capacity of these facilities exceeds 1,482,492.

**  With regard to religious tourism, Turkey is among the few countries in the world that is home to sites from a number of major religions. Of a total of 316 relics, 167 of them belong to Islam, 129 to Christianity, and 20 to Judaism.

**  Antalya is the most preferred city in Turkey based on the number of incoming foreign visitors. Visited by 25% of the foreign tourists in 2017, Antalya has over 500 4-star and 5-star hotels in its center and surrounding towns such as Kemer, Belek, and Kaş.

**  The number of hotel chains and groups in Turkey has doubled since 2001, hitting 165 today. The number of hotels in these 165 chains Turkey totals 824. In addition, 82 percent of chain and group hotels are domestically owned, 15% of these are foreign owned, while 3% of these have domestic and foreign partners.

**  In terms of geothermal tourism potential, Turkey is among the top seven countries in the world and ranks 1st in Europe with its 1,500 thermal springs. Bed capacity in the various thermal spa resorts has reached a combined 55,140.

**  The Belek region stands out as the most significant golf destination in Turkey, ranking among the world’s most popular tourism centers with 15 golf courses, a 50,000-bed capacity, and 2 million tourist arrivals. Moreover, Belek was named the Best Golf Destination in Europe by the International Association of Golf Tour Operators (IAGTO) in 2008. "

The astonishing development in transport infrastructure in Turkey over the last decade with new roads, new bridges, extensive train and metro investment, and new airports and additional domestic flight routes, has greatly facilitated the movement of tourists in Turkey. Turkey will be home to the world’s largest airport by passenger capacity (150 million passengers annually) through its third airport in Istanbul, the first phase of which is set to be open in 2019. Galataport will be the new cruise terminal in Istanbul providing a modern port facility to sea travellers.

Turkey indeed offers a wide range of attractions. It is rich in history and culture. It has natural beauty. It offers both winter and summer activities, with skiing resorts and long sandy beaches. It is a yachting paradise with a chain of fully equipped marinas around its coasts, and its top quality golf courses are a major attraction for golf tourists. It has many convention centres and is a widely recognised location for hosting large international conferences and conventions. Finally, Turkey has become a popular destination for cultural events, spas and health care tourism.

Show more
WHAT WOULD YOU LIKE TO KNOW ABOUT Tourism IN TURKEY ? ENQUIRIES