Will the Turkish automotive industry be able to regain its leading position in the Turkish economy ? 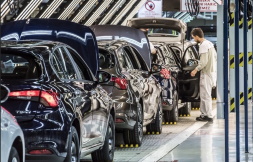 As from the end of March 2020, Turkey’s automotive manufacturers closed down their plants in quick succession as a result of the coronavirus pandemic bringing about the virtual shutdown of the global automotive industry. The disruption of global supply chains has been the main factor behind this decision, whereas other industries, with the notable exception of the tourism, catering and entertainment industries, have been able to continue in one way or another. Automotive manufacturers who have suspended production in Turkey include Mercedes-Benz Türk, Tofaş, Ford Otosan, Honda, Mercedes-Benz, Hyundai Assan, Otokar, Karsan, Honda, Oyak Renault, Toyota, and Anadolu Isuzu.

Turkey’s automotive sector’s production capacity is just over 2 million units per annum, but this was only utilised up to 70.9% in 2019.  According to figures prepared by the Automotive Industrialists’ Association’s (OSD), total car and commercial vehicle production was 1,461,244 units in 2019, down 5.7% from the figure of 1,550,260 units for 2018, which was in turn down 8.6% from the figure of 1,695,731 units for 2017. Despite the fall in production output since 2017, the automotive sector retained the largest share of Turkey’s total exports and remained the locomotive behind the Turkish economy.

The spread of coronavirus has been a big blow to the Turkish automotive sector which was knocked off its pedestal in the first quarter of 2020. In March 2020, total car and commercial vehicle production fell 21.8% to 103,350 units compared with the same month of the previous year. According to preliminary figures prepared by the Trade Ministry, in April 2020, the automotive sector has for the first time this month lost its first place spot in the export table, recording a figure of USD 518 million, 5.8% of total exports, whereas normal monthly automotive exports are over USD 2 billion and around 14-15% of total exports. Consequently, automotive exports in the month of April fell to fourth place behind machinery and mechanical equipment (USD 918 million), iron and steel (USD 654 million), and electrical machinery and equipment (USD 531 million).

The Transport Vehicles Supply Industry Association (TAYSAD) announced on April 27th that the turnover loss of the Turkish automotive sector in 2020 due to the coronavirus crisis will total some USD 5 billion. The association estimates that the fall in domestic and foreign demand will mean that Turkey will produce between 250,000 and 300,000 fewer vehicles in 2020 year and also lose around USD 3 billion in the export of vehicle parts, an important source of income for the automotive supply industry firms.

The outlook for the March – May period of this year is grim. Sales of cars in Turkey in March 2020, despite an increase of over 90% in the previous two months, had fallen to an increase of only 1.8% on the figure for the same month of the previous year. Production in March fell by 21.8%. With most if not all Turkish automotive manufacturing factories having closed down by the beginning of April, production fell by an expected 91.3% in April. Sales fell by 14.8% in April which is a fair performance under the circumstances and is largely due to high demand and cheaper loan facilities available.

It is hoped that the Turkish automotive industry will slowly recuperate as global and the country’s lockdown restrictions are relaxed. The Turkish government announced on May 5th that it expects all major automotive factories in the country to have restarted operations by May 11th. Toshihiko Kudo, the CEO of Toyota Motor Manufacturing Turkey, announced that its factory had returned to its normal plan of three rotating shifts and six-day production and planned to return to 96% of capacity by the end of May. He said they were now waiting for a signal from foreign car markets to ramp up production. Mercedes-Benz Turkey’s President and CEO Süer Sülün announced that the company’s Hoşdere Bus Factory had resumed production on April 20th and was now working at 60% of capacity, while its Aksaray Truck Factory had restarted on April 24th with two shifts operating a day. Sülen said the company was planning to produce at full capacity starting in July. Tuğrul Arıkan, the general manager of Turkish bus manufacturing company Anadolu Isuzu, announced that the company’s factories were now running at 60% of capacity. Hyundai Assan CEO Ali Kibar announced that they were waiting for orders from Europe to increase production capacity.

The fall in demand for automotive vehicles in Europe, to which 75% of vehicles manufactured in Turkey are exported, has adversely affected Turkey’s exports. In the first quarter of this year, overall sales of passenger cars in the European Union, United Kingdom and countries party to the European Free Trade Association (EFTA) fell by 52.9% when many showrooms were closed due to lockdowns to contain the coronavirus pandemic. The recovery of production in Turkey will therefore very much depend on a recovery of demand in Europe. The surge of 41% year-on-year in Turkey's car and light commercial vehicle sales in the first three months of this year has helped. However, the increase in domestic demand in Turkey was not enough to offset the collapse in demand from Europe.

In contrast to the currently poor results being recorded by the Turkish automotive industry, many sources see a much brighter future, if not a major opportunity in the long-term for the industry following a relenting of the coronavirus pandemic. A return to pre pandemic figures is expected by mid- July following the gradual return to production by Turkish manufacturers from mid-May. Though there will be a contraction in the industry in 2020, it is expected that there will be a significant improvement in 2021. Indeed, as the European automotive market resumes production amid uncertain demand due to coronavirus, Turkey is well-positioned to emerge from the crisis with less damage and to draw more export orders. The solid performance during the virus crisis (both in business and healthcare), the dynamism of Turkish firms, its proven resilience in dealing with crises, and its export-oriented structure all bode well for the Turkish automotive industry in the post pandemic era. It is also believed that the structural changes that the pandemic has bought about will push countries across the world to place orders in light of the geographic proximity of producers, and there is no country in Europe that is in a better position to boost capacity and capabilities as Turkey.

There is now much discusion that global companies are thinking or even already planning to shift their production away from China and invest in manufacturing facilities closer to their base to secure their supply chains. Turkey, with its production capacity, fast order fulfilment and logistic advantage, has a great opportunity to fill the vacuum. Turkey is indeed a major auto parts supplier, producing some of the key components of the world's highest quality brands.

It is now hoped that Turkey’s automotive sector will be back to full production by mid-July. However, much depends on continued high domestic demand and the recovery of foreign export markets if production is to return to normal pre-pandemic levels.