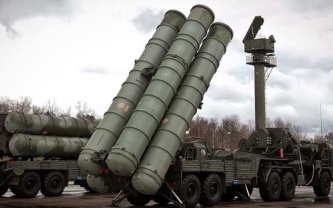 The Turkish government has for many months publically made it clear that the purchase of the Russian-made S-400 anti-missile defence system has been completed and that delivery of the system is now awaited. This purchase has caused a crisis between Turkey and NATO, of which Turkey is a member, since the S-400 system is not compatible with NATO systems and represents a potential threat to NATO warplanes and other defence systems. US Department of Defence officials have said that the S-400 radar system would provide Russia with militarily sensitive information on the F-35, which is the US’s top-quality fifth-generation aircraft. The United States has been particularly very vocal in its condemnation of this purchase, and has made it very clear that Turkey’s purchase of the F-35 fighter jets will be cancelled should Turkey go ahead with the S-400 system. The US wants Turkey to purchase its Patriot anti-aircraft system instead. Turkey has signed up to buying 100 F-35s, and has invested heavily in the F-35 programme, with Turkish companies producing 937 of the plane's parts. Its participation in the programme is therefore in jeopardy. There is also a very probable risk that the NATO alliance members will no longer share intelligence and technology with Turkey, and may well discourage military sales to Turkey and sharing of production of military systems with Turkey.

Acting US Defence Secretary Patrick Shanahan set out an ultimatum in a letter dated June 6th, 2019, to his Turkish counterpart, Defence Minister Hulusi Akar. In the letter, which has subsequently been leaked to the press, Shanahan effectively gave a  deadline of the end of July to choose between buying US fighter jets and Russian anti-aircraft missile systems.

Shanahan says in his letter that the US is "disappointed" to hear that Turkish personnel have been sent to Russia to train on the S-400, and that Turkey will not receive the F-35 if it takes delivery of the S-400," he writes. He adds that Turkey still has “the option to change course on the S-400." The letter included” a summary of actions the United States will take to suspend Turkey’s participation in the F-35 programme by July 31.” Shanahan writes that “this timeline will enable many, but not all, Turkish F-35 students currently in training to complete their courses prior to departing the United States by July 31, 2019.” A US military official specified that four Turkish pilots were currently training at the Luke airbase, with two additional Turkish pilots working there as instructors and 20 Turkish aircraft maintainers undergoing training. The first four F-35s due to be delivered to Turkey have still not left the US, officially to allow Turkish pilots to train in them in America.

More important for Turkey is the United States’ threat of imposing sanctions. The US congress has already started to prepare for the imposition of Countering America’s Adversaries Through Sanctions Act (CAATSA) sanctions against Turkey. This and other economic sanctions against Turkey would be a disaster for its economy. Only last year, the US’s imposition of a doubling in tariffs on Turkish steel and aluminium and threatening tweets from US President Donald Trump caused the Turkish lira to go into a nose dive, before being partially corrected following the release by Turkey of Pastor Brunson. The Turkish economy is currently in a deep recession, inflation and unemployment is high and the Turkish lira is still very volatile. Sanctions or even the threat of sanctions will have a drastic effect on Turkeys fragile economy.

The cost of the Russian S-400 defence system is over USD 2 billion, and Turkey has already paid half of this. Should Turkey want to break the deal with Moscow, there is an expectation that Russia may offer a delay to Turkey for a certain period to avoid a confrontation with the United States or that Turkey offers Moscow to re-sell the S-400 to a third country.

There are already many strains on the relationship between Turkey and the United States. These include detention of US consulate staff in Turkey on charges of terrorism, Turkey’s close relationship with Iran and Russia, Turkey’s policy towards the US sponsored Kurdish security forces in north Syria, and Turkey’s firm stance against the moving of Israel’s capital to Jerusalem and the US President Trump’s acceptance of Israel’s annexation of the Golan Heights in Syria.

Turkish President Recep Tayyip Erdoğan has been consistent in his remarks that the S-400 purchase is a done deal and that there is no turning back. He has been backed up by his ministers and his AK Party spokesmen who have all insisted that the purchase will go through. It is therefore difficult to see how Erdoğan can make a U-turn and refute all his past statements at this point in time. Apparently, negotiations are on-going for the purchase of the US Patriot missile defence system made by the US Raytheon company. Erdoğan has commented that the Patriot offer is not as good as that of the S-400.

Erdoğan has arrived in Osaka, Japan, for the G20 Summit to be held on June 28th and 29th. Before departing for the summit, Erdoğan said that regarding the S-400 system, “Trump knows Turkey's concerns, why we needed this system and how we came to this point very well.”  Erdoğan reiterated that Ankara would not back down from its purchase of the Russian system and said he had not heard anything from Trump regarding sanctions. Erdoğan added that "We have already paid them $1.25 billion for the F-35 project. If they do make such a wrong move, we will take it to the international arbitration court because we will want them to pay us back the money we have spent so far."

Erdoğan will be having one-on-one discussions with Trump. It can only be hoped that Erdoğan can persuade Trump not to introduce sanctions. Erdoğan is also hopeful that Trump will visit Turkey in July. Everybody is waiting with baited breadth in Turkey as to whether Erdoğan can prevent US sanctions and allow a further reprieve for the Turkish economy.