Many economic woes face Turkey in 2021 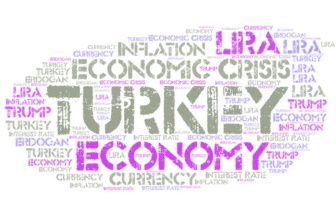 Listening to Turkish government ruling party officials, spokesmen, financial and economic ministers, and the government controlled media over recent years, one could be forgiven for not having any inclination that Turkey has been in economic recession since 2013. Indeed since 2013, the government has managed to slowly but surely degrade the Turkish economy which had achieved so much in the previous decade. The determination of the government party to retain and strengthen the support of its political base to ensure that it stayed in power, led to the adoption of divisive political strategies which have alienated Turkey’s secular, liberal, and more educated classes.  The government’s religious stance has secured the vote of the more pious and poorer masses, and its efforts to boost Turkey’s international status through involvement in many foreign disputes and challenging the West in particular, have also ensured the support of Turkey’s nationalists. In essence, Turkey’s economy has taken a back-seat and suffered as a result of the government spending so much of its time, energy and resources in geo-political confrontations.

Since 2013, there have been a number of events which have had a direct adverse impact on the Turkish economy. These include among others the sanctions imposed by the Russians in 2015 as a result of the shooting down of a Russian fighter, the failed coup attempt of July 2016, the influx of millions of Syrians fleeing the Syrian civil war, the financial crisis in August 2018, and the Covid-19 pandemic in 2020. The Turkish government’s economic policies during this period have not helped, with preference for grandiose and expensive infrastructural investment projects to gain prestige rather than encourage investments in industry and agriculture. The government has also insisted on pursuing monetary and fiscal policies to boost growth, aware that it needed to ensure a growing economy to keep its political base happy.

Especially since the failed coup attempt in July 2016, the government ruling party has increased its control over the judiciary, government institutions, and Turkish media, such that criticism of the government’s policies is very much stifled. Businessmen are very wary of criticising the government since such behaviour may adversely affect their commercial activities. Even businessmen associations and other private trade organisations are particular to word very carefully their analyses of business developments and government economic policies. As a result, it is very difficult to obtain accurate and detailed information about the state of the Turkish economy. To make matters worse, Turkey’s statistical institute TurkStat is under the close supervision of the Ministry of Treasury and Finance. The annual inflation rate, the unemployment rate, and indices such as the consumer confidence, economic confidence and industrial production indices are no longer considered reliable indicators in many circles. Even Turkey’s growth rate figures have been brought into question. Whereas Turkey recorded a growth rate of 1.8% in 2020, China is the only other country expected to record a growth rate in 2020. Though Turkey did introduce a stimulus package through low interest rates in 2020 benefitting domestic automotive and housing sales in particular, the negative affect of the Covid-19 pandemic was equally damaging in Turkey as in other countries. Turkish exports and tourism were especially hit hard. Continual revisions by TurkStat to the calculation methods of Turkey’s economic statistics in recent years have also not helped in creating confidence in their accuracy and reliability.

Despite the efforts of the Turkish government to paint a rosy picture of economic developments in Turkey, it has not been able to forestall the decline in the country’s economic indicators. In 2020, the Turkish lira had devalued 25%, exports had fallen 6.3% with an increase in the foreign trade deficit of 69.1% to USD 49.9 billion, tourism revenue had fallen 65.1% to USD 12.1 billion, the current account deficit had increased to USD 36.7 billion from a surplus of USD 6.8 billion in 2019, and the budget deficit had increased 38.5% to USD 24.7 billion. As of 2020 yearend, the Turkish Central Bank’s one week repo interest rate was back up to 17% and the private sector’s foreign debt was USD 173.3 billion. Undoubtedly the most damaging criticism which can be levelled at the government was the use of the Central Bank’s F/X reserves to prop up the Turkish lira in 2020. Indeed, it has been estimated that a total of USD 128 billion was squandered resulting in a net reserve balance of negative USD 45 billion, after allowing for swap transactions.

In November 2020, a new economic team was introduced with first Naci Ağbal replacing Murat Uysal as the governor of the Turkish Central Bank on November 7th, and then Lütfi Elvan replacing Berat Albayrak as Turkish Treasury and Finance Minister on November 12th. The new economic leadership, which was brought in as a result of the severe pressure on the Turkish lira, rising inflation, and the failure of monetary policies so far to bring economic stability, lost no time in raising the Central Bank’s policy rate by 475 basis points to 17% on November 19th. Statements were made, including from the Turkish President, to reinforce the government’s declared intention to bring about price and currency stability. Confidence was restored in monetary markets and the Turkish lira recovered dramatically from a low of TL 8.50 to the US dollar prior to the installation of the new economic team in early November 2020 to TL 7.20 by mid—March, 2021.

Despite grumblings in circles in the government’s ruling party and by businessmen close to the government, the Central Bank showed its determination to use interest rates to achieve control over inflation by increasing its policy rate further by 200 basis points to 19% on March 18th. This was despite an expectation by economists that the policy rate would only increase by 100 points. The rate hike was too much for Turkish President Recep Tayyip Erdoğan, a staunch believer of the unorthodox view that higher interest rates caused higher inflation, who proceeded to sack Central Bank governor Naci Ağbal on March 20th.

This was the third time that Erdoğan had dismissed the Central Bank governor since July 2019. However, this time the outcome was most dramatic as Naci Ağbal had won over the monetary markets, resulting in the Central Bank’s credibility being largely restored. The shock effects began to be felt in the evening of Sunday March 21st, when the Asian markets opened. On Monday morning the markets were in total disarray with the Turkish lira finally settling down to a rate of around TL 8.20 to the US dollar.

The new Central Bank governor Sahap Kavcıoğlu, a former member of parliament for Erdogan’s ruling AK Party, previously holding high-level positions in several banks, including state lenders Halkbank and Vakifbank, and a critic of Turkey’s high rates, managed to restore some calm with a statement that the Bank would continue to work towards price and currency stability. However, the damage had been done, and the Turkish lira had lost over 11%. With foreign currency reserves in the negative, available swap lines having been utilised, the government’s aversion to further interest rate hikes, and the final dramatic loss in the credibility of the Turkish Central Bank, the Turkish government has no remaining means at its disposal to protect the local currency from exterior pressures. The Turkish lira has now been left to its own means, and such is its volatility that there is now the real prospect of the intervention of the International Monetary Fund (IMF) or capital controls.

The Turkish tourism industry which had been expanding strongly over recent years, was severely hit in 2020 as a result of the Covid-19 pandemic. There had been much optimism that tourism would recover in 2021 as the vaccination programme was implemented and normalisation achieved. However, with delays in the vaccination programme and daily Covid-19 cases in Turkey surpassing a record 40,000 at the beginning of April 2021, it would now appear that 2021 is also going to be adversely affected. Many countries have decided to only permit tourist activities from the middle of May, but this date now appears very optimistic. If the daily pandemic cases in Turkey continue at its present level, then countries may well be adverse to allow their civilians to go to such high risk locations. It is clear that international tourism in 2021 now depends very much on the implementation of national vaccination programmes.

The new record levels in Covid-19 cases as a third wave of infections hits Turkey this Spring will also be a blow to the Turkish economy as restrictions on the movement of the population continues. A large proportion of the population has seen its income fall or disappear, and been pushed further towards poverty. Demand for goods and services has fallen dramatically with many small businesses in particular having closed or been restricted in scope of operation for over a year now. There will be a subsequent fall in tax income for the government as economic activity continues to contract, and there is a strong prospect of a soaring budget deficit in 2021. Turkey’s economy was already in an economic recession even before the Covid-19 pandemic came on the scene. The recent higher interest rates, introduced for price and currency stability, will discourage investment and growth further.

In 2021, Turkey is faced with a high amount of maturing debt, on both public and private sector levels, just at a point in time when funding on international markets is becoming more difficult and expensive. There is a risk that Turkey’s default on its international debt will cause a domino effect on other emerging markets, and such a scenario is a prospect which will want to be avoided by the international community, especially by the European Union, many banks of which have large outstanding lines in Turkey. If necessary, Turkey will be encouraged to make an agreement with the IMF despite such a development being of anathema to the Turkish President Erdoğan, who will not want to have conditions dictated to him.

The only bright light among all this doom and gloom is Turkey’s export figures. The preliminary export figure for March 2021 is USD 18,985 million, which is the highest monthly figure recorded to-date. On a negative note, the import figure is also a record high at USD 23,679 million, resulting in a deficit of USD 4,694 million. It is clear that the import input of Turkey’s exports is high, but there is no denying the high foreign trade economic activity achieved by Turkey. As the world struggles to recover its pre-pandemic trade levels, Turkey seems to have already got off to a good start which will help it weather through the tough period it faces to correct its fundamentals. Above all, the comparatively high foreign trade activity enjoyed by Turkey reflects the resilience of Turkey’s private sector despite the bad management of the economy by the Turkish government.

2021 will be another difficult year for Turkey. Inflation and unemployment will continue to rise, and economic recession will continue to deepen before any improvement in economic outlook can be expected. It is only hoped that the Turkish government will finally recognise the country’s dire straits and act accordingly, rather than behave in denial and create a panacea whereby Turkey enjoys economic growth whereas the population becomes more and more impoverished.