Is Canal Istanbul really worth the cost and resultant upheaval ? 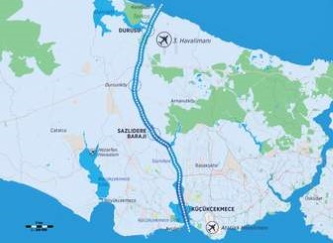 Following the announcement by Turkish President Recep Tayyip Erdoğan that Canal İstanbul, a mega-infrastructure project involving the construction of a 45 kilometre shipping canal in Istanbul parallel to the Bosphorus strait, will be going ahead and will be open shortly for tenders, the Environmental Impact Assessment report for the project was approved by the Ministry of Environment and Urbanisation. Canal Istanbul has been on the government’s agenda since 2011, but its realisation has been delayed several times due to financial problems and environmental concerns. The most recent postponement was announced in 2018 during the financial crisis that year. However, in recent weeks, Erdogan has put building of ‘Kanal Istanbul’ back atop his domestic agenda. The government has said the canal will be 45 kilometres (nearly 28 miles) long, 25 metres (80 feet)) deep, and 440 metres wide (but at some points increasing up to one kilometre). It will start at Lake Küçükçekmece, a naturally formed lagoon on the Marmara Sea coast west of Istanbul, go north through the Sazlıdere Dam, and connect to the Black Sea to the north between the Durusu Terkos reservoir and Istanbul Airport. Soil excavated to form the canal will be used to build three artificial islands in the Marmara Sea. When completed, the canal will turn the densest part of the city, including its historic centre, into an island.

With Canal Istanbul, the government is aiming to alleviate the tanker traffic through the Bosphorus as well as constructing new earthquake-resistant residential areas along the channel. Erdogan says the canal is needed to ease traffic on the Bosphorus and protect its historic structures, calling it an “environmental salvation”. The canal is planned to have a capacity of 160 vessels per day, roughly the equivalent to the current volume of traffic going through the Bosphorus strait. Digging is expected to start in 2019, and the canal is planned to be completed in 5 years by 2023, the anniversary of the founding of the Turkish Republic.

Environmentalists however have voiced serious concerns about the artificial channel by arguing that the seaway will damage the underground water resources of Istanbul and will threaten the Marmara Sea along with other social and urbanization risks. According to the Union of Chambers of Turkish Engineers and Architects (TMMOB), the proposed canal would run through a lagoon whose ecosystem, vital for marine animals and migratory birds, would be destroyed, The association says that it would demolish two basins that provide nearly a third of the city’s fresh water, increase the salinity of underground streams, harm agricultural land as well to the west, and raise oxygen levels in the Black Sea. It also notes that the project straddles one of the world’s most active earthquake fault lines.

Erdoğan’s “crazy project”, as it was dubbed in his own words, faces a great deal of opposition. Istanbul’s new mayor, Ekrem Imamoğlu of the main opposition party has emerged as the  project’s chief opponent, warning it will cost too much and wreak environmental havoc. The opposition leader of the Republic People’s Party Kemal Kılıçdaroğlu has also said that they will cancel the project once they came to power. It has been emphasized that while only some 369,000 people living in the area may only be directly affected by the project, with many of them being displaced, the existence of a giant construction site on the western flank of Istanbul will to differing degrees and aspects affect the entire 16 million population of Istanbul. Thousands of lorries carrying earth and work on new road bridges will for example have a serious negative impact on Istanbul transport and traffic. Despite the strong opposition however, President Erdoğan insists on pushing ahead with the project.

There are however questions as to how the canal will be funded. It is estimated to cost between USD 15 and 20 billion. In the past, the government was able to implement massive construction projects fuelled by cheap foreign credit. However, the government can no longer rely on such international funding as the country credit rating is poor and foreign investment interest in Turkey has waned. The government is unable to fund the project through its own funds as is shown by its budget for 2020 which foresees a deficit of TL 138.4 billion (USD 23.5 billion). Since the canal is planned to be completed by 2023, the very short span of time means that an urgent and comprehensive solution to funding will be required from the very start. The government intends to partly finance the project through a build-operate-transfer finance model is being employed, but there are doubts as to whether the operation of the canal will generate the funds needed to adequately reimburse the contractor. Guarantees by the government could result in heavy future costs to meet shortfalls in income.

There is also a strategic side to the building of Canal Istanbul. The 1936 Montreux Convention gives Turkey control over the Bosphorus straits within its borders, and during peacetime guarantees access for merchant vessels, while limiting access of naval warships, and thereby helping to protect the Black Sea from militarisation. According to the convention, merchant vessels enjoy freedom of passage through Turkish straits while naval warships are subject to some restrictions, which vary depending on whether or not the vessels belong to nations on the Black Sea coast. Warships belonging to any non-Black Sea nation are subject to specific restrictions, including limits on the maximum aggregate tonnage (combined tonnage not to exceed 30,000 tons) and duration of stay in the Black Sea (21 days at most).

Turkish officials have repeatedly said that Canal Istanbul would not be covered by the Montreux Convention. In this case, the canal would possibly open the door to US warships in the Black Sea. Such a development is of deep concern to Russia in particular.

There is much discussion as to why Erdoğan is pushing for the construction of Canal Istanbul at a time when Turkey is in the midst of an economic recession, when the Turkish population is reeling from high inflation, unemployment and a falling standard of living. The government is cutting back on expenditure and increasing taxes in order to restrain the growing budget deficit, and is not otherwise pursuing any new significant infrastructure projects other than completing those already started. Just as with the government’s agenda to produce an indigenous Turkish car, the government is very much aware of the falling electoral support for the ruling Justice and Development Party (AKP). It is possible that they know that these two mega projects are not commercially feasible at this point in time. However, the government needs to convince the electorate that they are solely capable of implementing such mega projects and protecting national interests, and that the economy is still strong and resilient to temporary downturns. Indeed, the government may have decided that it will find the necessary excuses and justify policy u-turns when the time comes.