2018 - A turbulent year for the Turkish economy 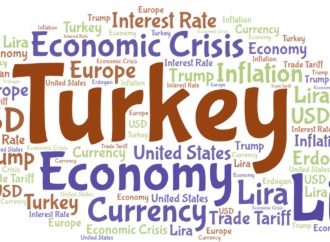 For an economy heading into recession, the multiple traumatic events which occured in 2018 are not exactly what an economist would have liked to envisage in his list of actions required to ensure some kind of sound economic recovery. Indeed, he would have been frustrated and distressed to have had to patiently wait and sit out the six months leading up to the presidential and parliamentary elections on June 24th, 2018, and witness the implementation of growth impetus policies by the Turkish government to an economy which was showing serious signs of overheating. Following the June elections, the pressure on the Turkish lira was building up and there were signs that the boiler would finally burst as the Turkish Central Bank declined to further raise interest rates in its policy meeting of July 24th, 2018. The USD rate was TL 4.90 at the end of July, from TL 4.56 at the end of June, and had reached TL 5.40 on August 9th before the economy was hit head on by a train driven by the President of the United States of America, Donald Trump on August 10th.

It was just a tweet, but it had a disastrous effect. “I have just authorized a doubling of Tariffs on Steel and Aluminum with respect to Turkey as their currency, the Turkish Lira, slides rapidly downward against our very strong Dollar! Aluminum will now be 20 percent and Steel 50 percent. Our relations with Turkey are not good at this time!”

The USD rate was TL 5.94 on August 10th, and as the tensions between Turkey and America continued to deteriorate, the rate had reached TL 6.55 at the end of August. The steam had been let out of the economy’s boiler, but the wreckage left of the economy was strewn far and wide. The latest rate meant that the TL had devalued against the US dollar over 70% in 8 months. Industrialists were in a state of total confusion as all their financial strategies had been turned on their heads, and economists were in a state of shock as there was no longer any reliable data for forecasting. The Turkish and Treasury Ministry had to produce a new budget in the form of its Medium Term Programme on September 20th, 2018.

As tensions with America calmed and Turkey started to follow a more conciliatory approach towards the West and take a somewhat lower profile on the international arena, so economic indicators  began to slowly normalise and the Turkish government began to regain some sort of control over developments in the economy. The USD rate had fallen back to TL 5.28 and inflation had settled down to 20.3% by the end of the year. Unemployment however had continued to rise to 12.3% in November 2018 and the Turkish Central Bank’s policy rate remained at 24%.

The collapse of the Turkish lira in August had an immediate adverse effect on inflation which surged to 24.52% in September 2018. This caused consumer spending to fall dramatically resulting in many financially insecure companies to apply for concordato. The surprisingly positive outcome of this was a fall in the foreign trade deficits and the current account deficits during the latter months of 2018. Indeed, the current account showed a surplus for the four months from August to November 2018.

With the economy having blown its boiler and the crisis with America apparently resolved, under normal circumstances it would have been expected for the government to implement a tight fiscal policy to ensure a gradual and sound recovery of the economy. Despite early indications that the government would do just that, it nevertheless implemented tax reductions from the beginning of October 2018 in order to support the flailing automobile, housing and white goods sectors, at the same time as encouraging banks to restructure and extend new loans.

The Turkish government’s U-turn on its promises to implement more restrained economic policies did not come as a surprise since everyone was aware that it would not be prepared to introduce austerity measures before the up-and coming local elections on March 31st, 2019. Since the August currency crisis, the government has subsequently been involved in a very clever and intricate cover up, denying the existence of a serious economic crisis and insisting that it had everything under control. Indeed, negative talk about the economy has been frowned upon as almost unpatriotic. As for the currency crisis in August, Trump had offered himself unknowingly as a scapegoat and the government had been given the golden opportunity of piling the blame yet again on foreign interference.

Though we now find ourselves in an unreal world where the Turkish government is in denial and painting a rosy picture of the Turkish economy despite all the negative data, the underlying faults in the economy remain very much in full view. Production and therefore growth are fast contracting, the construction sector has gone into winter hibernation with the rise in cost of construction materials and fall in housing demand, the agriculture sector is in crisis, automotive sales have fallen dramatically, the foreign debt of the private sector remains dangerously high, the banking sector is threatened by the indebtedness of the private sector with non-performing loans fast increasing, exports which are reliant on 60% import content will be impaired by falling imports, and government fiscal debt which has to date been admirably low now appears to be in danger of taking off as the cost of financing an impoverished electorate rises. In the meantime, inflation, interest rates, and unemployment remain high.

2018 has been a crazy year. It all started with the economic fall-out from the failed coup attempt on July 15th, 2016. The Turkish government then rebooted the indebted private sector with state guaranteed loans and maintained higher growth through large state guaranteed construction projects. The private sector and the economy were kept alive to see them past the referendum on April 16th, 2017 and the presidential and parliamentary elections of June 24th, 2018. The Turkish government has miraculously succeeded in keeping the private sector and the economy alive through blood transfusions for over two years. However, their health has deteriorated so much that they no longer have the strength to continue. They will need to go into intensive care if they are to stand any chance of recovery in the foreseeable. Let us hope that March 31st, 2019, the day of the local elections, will not be too late.